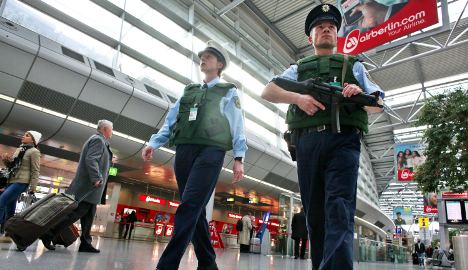 “Experts from the (German) federal police force examined the luggage on site,” Thomas de Maizière told reporters after a meeting of interior ministers from Germany’s 16 states.

“The outcome is that the luggage turned out to be a so-called real test suitcase made by a company in the United States. This company is a manufacturer of alarm and detection systems and these real test suitcases are built to test security measures.”

De Maizière did not say precisely who planted the dummy. It was being checked “when and to whom the bag was sold.”

He said he thought it was ”highly unlikely” that German security forces were involved in the test, though this was being investigated. It remains unclear why the incident was allowed to turn into a full-scale terrorism scare.

“The important thing for all of us is that no explosives were found in the luggage and that, as far as we know at this point in the investigation, there was at no point a danger to passengers posed by this luggage,” he said.

Namibian police said neither the US government nor the German or Namibian governments were behind the security test.

“It will be determined who deposited it. The governments of US, Germany and Namibia were not aware of the parcel,” police inspector general Sebastian Ndeitunga told reporters.

“It is devoid of truth that the US government put the device there to test how good the Namibian security is.”

The laptop bag seized at the airport of the Namibian capital Windhoek on Wednesday morning contained no explosives, though it did consist of batteries connected by wire to a working clock. The discovery caused a major security scare and forced authorities to conduct further security checks on the Air Berlin flight to Munich, delaying the flight for about six hours.

Germany nevertheless remains on high alert because of the threat of an attack. The head of the Federal Police, Matthias Seeger, said the risk of attack was greater than ever before.

“On a scale of one – meaning no danger – to 10 – meaning an acute danger – we are at the moment around nine,” he told Friday’s edition of daily Bild.

Heightened security measures are likely to be maintained at least until the end of the year.

“Security authorities are prepared for the state of emergency to go on at least until the end of the year,” police union chief Rainer Wendt told the Neue Osnabrücker Zeitung.

Holidays and free days for December have already been cancelled for police in many parts of the country.

De Maizière raised the threat level for Germany on Wednesday, warning that there were “concrete” indications of a planned attack around the end of November.

An ICE train was stopped and evacuated at the main train station of Düsseldorf on Friday because of a suspicious item. A Federal Police spokesman said passengers on the ICE 609 from Kiel to Basel in Switzerland noticed the item which seemed to them to be out of place.

The train was stopped at Düsseldorf station and about 230 passengers evacuated. Bomb experts examined the item and gave it the all-clear, whereupon the train continued its journey.

“The anti-terror warning is being taken seriously,” the police spokesman said.

Also Friday, a platform at Hannover’s main train station was evacuated because of a suspicious plastic bag, a police spokesman said.