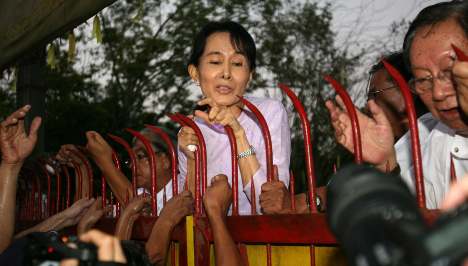 It was confirmed that the democracy campaigner and opposition politician was released from a seven-and-a-half year house arrest on Saturday morning – early evening local time in Rangoon, prompting celebrations around the world.

“Aung San Suu Kyi is a symbolic figure for the global fight for the realisation of human rights,” said Merkel in a statement. “Her non-violence and determination have made her into a admired role-model.”

Hundreds of people had gathered around 65-year-old Suu Kyi’s house, waiting for hours for her to be released and speak to the crowd. By the time the barriers were removed the crowd had swollen to thousands.

“The people must work closely together. Only that way can we reach our goal,” she told them.

As the daughter of a martyred independence leader, she has long led the fight for democracy in the country, which has largely been misruled by a military junta since 1962. As a result, Aung San Suu Kyi has spent only six of the last 21 years in freedom.

Her political party, the National League for Democracy, won a Burmese general election 20 years ago, but the military leadership never acknowledged the result and refused to hand over power.

Aung San Suu Kyi was awarded the Nobel Peace Price in 1990, shortly after being put under house arrest.

The next elections were held only last weekend and were won by the pro-military party, but were widely condemned as a sham by observers.

US President Barack Obama also called for other political prisoners in Burma to be released. Of Aung San Suu Kyi, he said: “She is a heroine for me and a source of inspiration for all who work for basic human rights in Burma and all over the world.”