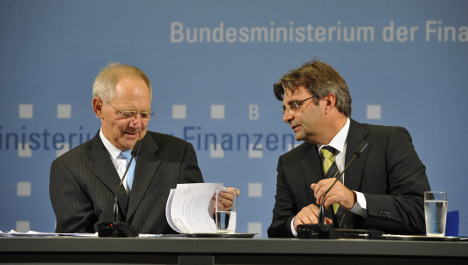 Schäuble said in a statement that he had accepted his spokesman Michael Offer’s resignation, which came several days after Schäuble rebuked Offer in front of about 50 journalists at a press conference.

“Michael Offer has asked me to relieve him of his role as the minister’s spokesman. Today I complied with this wish.”

Schäuble expressly thanked Offer “for his tireless dedication and his loyalty.”

In a letter to Schäuble, given to news agency Reuters, Offer said he believed he no longer enjoyed the minister’s full confidence.

“I am therefore announcing my resignation as your spokesman and ask for assignment to a new responsibility,” he wrote.

The public reprimand came last Thursday at a press conference to announce that the government was the fortunate beneficiary of a budget windfall of about €61 billion.

Schäuble, angry that journalists had not been given printed copies of the new tax numbers ahead of the announcement, growled at Offer: “Don’t talk – instead make sure the figures are handed out.”

Schäuble left the press conference shortly after the disagreement, only to return about 20 minutes later.

He subsequently admitted to Bild am Sonntag newspaper that he “might have overreacted” despite any “justified aggravation.”