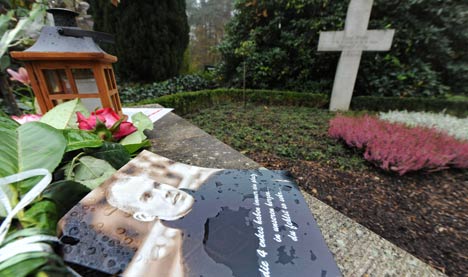 As first-choice goalkeeper, Enke had been set to travel to South Africa with the German national side to play in June’s World Cup, but he committed suicide on November 10, 2009 by throwing himself under a commuter train. He was 32.

His widow Teresa held a press conference less than 24 hours after her husband’s death to explain he had been suffering from bouts of depression since 2003.

“We thought with love, he would get better,” she told journalists as the shockwaves from Enke’s death were felt across football-mad Germany.

The entire Germany squad attended Enke’s funeral service at the stadium of Hanover 96, which he had captained, where around 35,000 fans mourned the loss of their hero.

Germany coach Joachim Löw and Theo Zwanziger, the president of the German Football Federation (DFB) plan to lay a wreath on Enke’s grave this Wednesday. Fans are also planning a memorial march the same day from the city centre to the Hanover 96 stadium to pay their respects.

But 12 months after Enke’s death, Prof. Dr. Gunter Gebauer, a former athlete and philosopher at Berlin’s Free University, says there is still little sympathy for athletes suffering from depression.

“Things have changed surprisingly little,” Gebauer told German daily Bild. “First, there was a big shock after his death and the feeling that we must do more to protect at-risk athletes. But professional football is as brutal as ever. More victims will suffer before anything changes.”

Gebauer says sports stars are discarded far too easily in modern society. He highlighted the example of injured Germany captain Michael Ballack, who missed the World Cup with an ankle injury and has now lost his place in the national side to younger players.

“You only have to just look at how the injured captain of the national team was dealt with,” said Gebauer.

“When Michael Ballack was ruled out of the World Cup, first there was sheer dread. But once Germany started being successful without him, his own team-mates seemed glad he was gone and he has now been stamped as a out-of-date model.”

And Gebauer said any sportsman who admitted they have a weakness or, like Enke, suffer from depression, would be finished in such a cutthroat environment.

“What would happen if a football player reveals his weakness? He would be finished. In this merciless business, it’s all about the newest talent and how they portray themselves.”

Just last weekend, it was revealed German speed-skater Claudia Pechstein admitted planning to take her own life after she was banned from competing for two years in 2009 and faces an up-hill task to return to her sport.

The International Skating Union (ISU) banned the 38-year-old for two years in March 2009 after the five-time Olympic champion was found to have had irregular levels of young red cells in her blood. In the wake of her ban, the German star admitted she planned her own suicide, along with her husband, by throwing herself off a motorway bridge, but her agent managed to talk her out of it.

“These thoughts still plague me,” wrote Pechstein in her autobiography ‘Of gold and blood’.

“Sponsors gone, job gone, home gone. From one moment to the next, I am overcome by the fear for my very existence.”

After his death, The Robert Enke Foundation was set up to help those suffering from depression.

Gebauer says Enke’s high-profile suicide has highlighted the symptoms of the mental illness and meant other sufferers can get the help they need.

“A former world-class athlete recently said in an interview that he was saved because his family heard about Enke and saw similar symptoms in him,” said Gebauer. “So Robert Enke did not die completely in vain.”