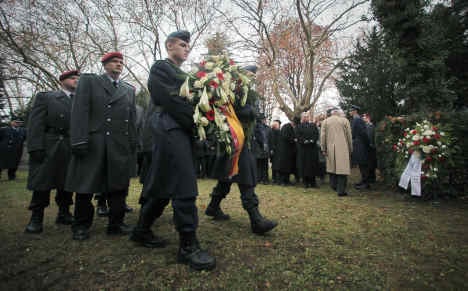 The memorial was held at the Jewish cemetery in Frankfurt. Gideon Römer-Hillebrecht, deputy chairman of the German Association of Jewish Soldiers (RjF), said it was the first time that representatives of the German government, as well as the German Bundeswehr and other national militaries, took part in the ceremony.

Schmidt said the deaths of the estimated 12,000 Jewish soldiers who fought for Germany during World War I have been rarely acknowledged – and that remembering their sacrifice was a duty.

He added that many Jews entered the war out of patriotic conviction but were denounced as “scapegoats” after WWI ended in 1918.

Following the wreath-laying ceremony, the names of the 50 Jewish soldiers buried at the cemetery were read aloud. According to the German Association for Jewish Soldiers, some 467 Jewish men in uniform from Frankfurt were killed during World War I.

The RjF’s Römer-Hillebrecht said the ceremony should not only pay tribute to the lives of fallen Jewish soldiers, but also honour their relatives and comrades killed during the Holocaust. The Nazi regime murdered six million European Jews during World War II.

“Because of the Shoah, there are few relatives still here today who can honour the dead with us,” he said.