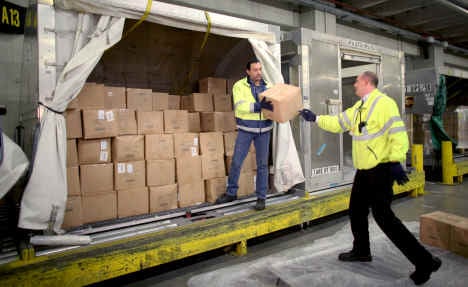 German news magazine Der Spiegel said shipments arriving from airports on the list would be subject to more thorough inspections under the interior and transport ministries’ plan.

German Interior Minister Thomas de Maizière is reportedly set to call for an expansion of security authorities’ powers on Monday, during a meeting with European Union interior ministers in Brussels.

The ministry’s five-point plan would grant authorities electronic access to logistics companies’ databases – which include information on the sender, recipient and cargo declaration, according to Der Spiegel.

The government hopes this will facilitate better identification and inspection of suspicious packages.

Berlin has already enacted a ban on airfreight and passenger planes from Yemen, after a parcel bomb posted in the country was discovered in Britain. The item had been shipped through Cologne-Bonn airport.

Just days later, an explosive package was found during a routine check in the mail room of the German Chancellery. Federal police successfully disarmed the parcel, which originated in Greece.

According to Der Spiegel’s report, the coalition government is also considering whether to change parts of the aviation security law before the end of this year – though the German parliament is not due to see a revised version of the legislation until the summer of 2011.

“In the event that changes or additions to the law are necessary, we will undertake them as quickly as possible,” said German Transport Minister Peter Ramsauer, a member of Merkel’s conservatives.

Ramsauer added that he was prepared to allow the interior ministry to take over inspections of air cargo if another organization was deemed more effective for freight controls.