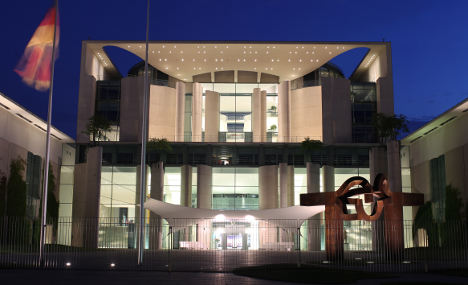 The BKA said the parcel was tested for dangerous materials on site at the Chancellery and made harmless with a water canon.

“It looked like someone was trying to send a message,” a security official told the paper.

The news agency DPA reported the briefcase-sized package was delivered to the Chancellery around 1:00 pm with the return address of the Greek Economy Ministry. Shortly thereafter the mail room was shut by federal police.

“During routine checks on mail received, a small package was discovered with suspicious features that pointed to the possibility of explosives inside,” government spokesman Steffen Seibert said in a statement. “No one was injured.”

Merkel was in Belgium when the package was discovered.

The package in Berlin was intercepted after parcel bombs exploded at the Russian and Swiss embassies in Athens on Tuesday, part of a wave of attacks linked to leftist extremists in Greece.

The bombs were similar to four devices addressed to embassies in the Greek capital and intercepted Monday, including one addressed to French President Nicolas Sarkozy. Controlled explosions were carried out by police on suspect packages addressed to the German, Chilean and Bulgarian embassies.

During the Greek credit crisis in April, Merkel pushed hard for Athens to adopt major austerity measures before any bailout would be agreed. The subsequent budget cuts have proved deeply unpopular in Greece.

The latest incident comes on the heels of the discovery last week in Britain and Dubai of two US-bound parcels addressed to Jewish institutions in Chicago and containing the lethal explosive PETN hidden in ink toner cartridges.

They had been posted in Yemen and have been linked to the group Al-Qaida in the Arabian Peninsula and a bomb maker believed to be hiding in Yemen. The bomb found in Britain had been routed via the western German city of Cologne.

Germany extended a ban on air freight from Yemen to passenger planes, becoming the first to reject all flights from the Arabian peninsula nation after other countries moved to stop only cargo.