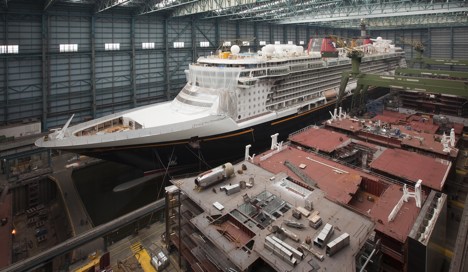 The completion of the ship will be marked by a firework display in the late afternoon, ahead of its maiden voyage, scheduled for January 2011.

The ship, built in the Meyer Werft shipyards, is the third and largest in the Disney fleet, with a length of 340 metres and a capacity for 4,000 passengers. Its special features include the first seaborne water-slide and virtual portholes in the inner cabins, which allow high-definition cameras to provide real-time views of the ship’s exterior.

The ship will initially be docked at an adjoining pier, where it will undergo a number of technical tests on Sunday. It is scheduled to sail to the North Sea in two weeks’ time, and will join the rest of the Disney fleet in the Bahamas by the New Year.

Its sister ship the “Disney Fantasy” is scheduled for completion at the end of 2011.