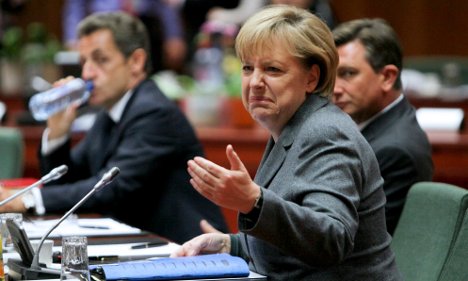 “I can say on behalf of Germany that we pushed through our essential points,” the chancellor said, adding that the talks which ended at 1:30 am had been “hard and extensive.”

The European Union’s 27 leaders successfully agreed on long-term budgetary mechanisms for member countries in financial crisis at the summit, she said.

“All were in agreement that for this a limited revision of the (Lisbon) treaty will be necessary,” she added, adding that there would no longer be any bailouts for countries in distress. “The crisis mechanism is valid only in case that the stability of the euro as a whole is in danger.”

The changes to the treaty will mean swifter and harder measures against EU countries that exceed their deficit limits, and comes by in large in reaction to the recent financial problems in Greece.

In the future, private creditors including banks will have to shoulder part of any sovereign debt crisis to ensure taxpayers aren’t left with the entire cost.

Merkel was reportedly the central figure in the negotiations, taking a hard line on Germany’s demands. However, she failed to push through the suspension of voting rights for those EU countries failing to fulfil their financial commitments.

“Merkel became quite emotional during the debate about voting rights,” said one EU diplomat.

But by abandoning that demand, the chancellor was able to convince other EU leaders to back her other priorities.

EU President Herman Van Rompuy has now been tasked with preparing for a “light” treaty change before a “final” decision at a December summit. The changes would be implemented by mid-2013 when the €750-million rescue package created following the Greek debt crisis runs out.

Merkel, along with French President Nicolas Sarkozy, faced heated criticism from smaller countries for pushing the tough reforms, with high-profile EU figures saying the pair had opened a “Pandora’s Box” of problems.

Luxembourg Foreign Minister Jean Asselborn also warned of “a risk that we will be plunged back into months and years of navel-gazing.”

Many EU countries also disliked the idea of simply signing off on a “diktat” by Berlin and Paris.