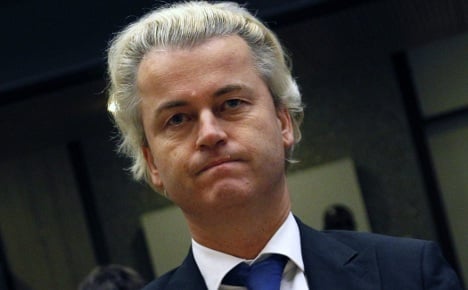 “Mrs Merkel – she is right,” he added as he gave the opening address on behalf of his Freedom Party (PVV), which recently agreed to support a minority right-wing coalition government in the Netherlands.

Merkel added fuel to an already heated immigration debate in Germany when she said in a speech to her party’s youth wing earlier this month that multiculturalism had “failed utterly.” However she also made a point of adding that “Islam belongs to Germany” – a fact that Wilders left out of his address.

Merkel’s spokesman, Steffen Seibert, angrily replied to Wilders’ speech by saying that that the Chancellor had in no way expressed “criticism of Islam.”

“That is not true. You cannot interpret the Chancellor as a critic of Islam because she naturally has respect for an important world religion,” Seibert said in Berlin.

“When the Chancellor herself says that the multicultural society has utterly failed, then that is saying something,” he said.

During a debate about the minority government programme put forward by the coalition of Dutch Christian Democrats, pro-business Liberals, the anti-Islam populist added: “The most important politician in the Christian Democrats in the most important country in Europe breaks a taboo and says it how it is. And she said what millions of people think.”

Spokesman Seibert replied: “The Chancellor expresses her convictions independent of who agrees or disagrees with her here or abroad. Certainly she makes no statements to get applause from that corner.”

“In Germany, meanwhile, two thirds of the people say, ‘Islam does not belong to our country,’” Wilders said.

Only a few weeks ago during a visit to Berlin, the 47-year-old Dutchman slammed Merkel and Germany’s established parties for supposedly accepting the “Islamisation” of Germany.