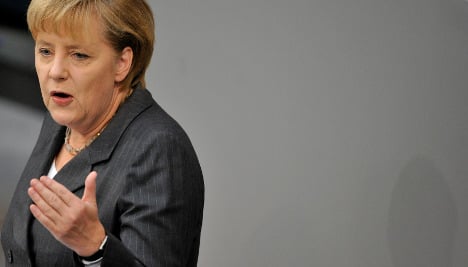 European institutions and several countries have attacked Germany and France for what they see as a dictatorial approach to EU policy-making, setting the scene for a fiery meeting of leaders in Brussels.

Speaking in parliament ahead of the summit that begins Thursday, Merkel reiterated her demand for changes to the existing EU treaty to strengthen deficit rules in a bid to avoid another Greek-style fiscal crisis.

At a meeting in the French town of Deauville last Monday, Merkel and French President Nicolas Sarkozy agreed that penalties should be toughened for EU fiscal sinners, allowing for their voting rights to be removed temporarily in extreme cases.

They also proposed the creation of a permanent safety fund for countries in difficulty, a French demand that was formerly opposed by Berlin.

However, both the manner in which the deal was sealed and the call to reopen painful negotiations over the EU treaty have encountered considerable opposition.

The head of the eurogroup, the 16 nations that share the single currency, slammed the Franco-German approach to policy-making, describing it as “simply impossible.”

In an interview to appear in Thursday’s edition of German daily Die Welt,

Jean-Claude Juncker said: “This agreement is not acceptable in its current form, because it does not guarantee a strict course of stability nor a stability pact with bite.”

The chief economist of the European Central Bank, Jürgen Stark, also argued for a tougher framework, calling for “automatic sanctions” when member states break the rules.

The European parliament’s main political groups have also accused France and Germany of imposing their will on the rest of the European Union, with one describing the Deauville accord as a “diktat.”

The call for treaty changes prompted outcry as politicians recalled the painful eight-year process required to bring the current Lisbon Treaty into force.

Economic and Monetary Affairs Commissioner Olli Rehn said he would “by far prefer” that national leaders steer clear of treaty change, suggesting that other legal avenues are still available.

But Merkel insisted: “We need a new, robust framework. It must be legally watertight and this will happen only with a change of the treaty.”

“The fact that some are afraid of the consequences” of such treaty changes “isn’t an argument against going down this road,” she said.

She also called for a “swift decision” on a “crisis mechanism” that would allow for a form of orderly insolvency for states labouring under high deficits.

“We need to take today measures that should allow us to overcome future crises,” said Merkel.

“Even with the strictest stability rules possible, we will not be able to prevent crises arising in the future.”