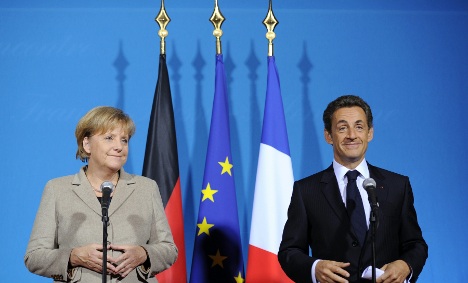 A deal brokered a week ago by German Chancellor Angela Merkel and French President Nicolas Sarkozy “leaves a bad taste” for other European nations that feel they are being told what to do, said Luxembourg Foreign Minister Jean Asselborn.

Not only because of the manner in which Germany and France appeared to be dictating EU requirements, he said, but because “there is a risk that we will be plunged back into months and years of navel-gazing” after a “decade” of angst over Lisbon.

The bloc’s current treaty only came into force late last year after a difficult birth with Ireland throwing it out in a first referendum before a positive second vote left ultra eurosceptic Czech President Vaclav Klaus with little choice but to sign its final ratification.

The Czech Foreign Minister Karel Schwarzenberg also said no-one should assume that even a tweak, as France and Germany are wont to present the changes, would pass easily.

“In this world, anything is possible,” he said on arrival for talks between EU foreign ministers in Luxembourg focused on Serbian accession and a possible change in the bloc’s policy towards Cuba. “But it’s not very likely,” Schwarzenberg underlined.

Germany will only make permanent its lion’s share contribution to a three-year fund of emergency loans for struggling eurozone countries if the EU treaty is changed, otherwise it fears its Constitutional Court in Karlsruhe will block the move.

The IMF-backed fund only came about because of widespread fears of contagion following the Greek debt crisis, which saw markets punish Athens with ferociously high rates for state borrowings.

Berlin also wants the treaty change to enshrine tougher rules currently being drawn up by the EU’s various powerbases for countries that overspend, so as to remove voting rights from the most serious offenders.

“We want to protect our citizens’ currency and that means learning the lessons of the crisis,” said German Foreign Minister Guido Westerwelle.

“If we find ourselves back in the situation we experienced with Greece in the spring, Europe will move dangerously close to the brink,” he warned.

Finland’s Foreign Minister Alexander Stubb said he was open to the ideas put forward by Berlin and Paris, stressing that “at the end of the day, as long as the rules are tight, I’m happy.”

However, he warned that the process is not exclusively in the hands of the states, underlining that the European Parliament wants “much tougher” changes introduced.

“The fun hasn’t even begun yet,” he stressed.