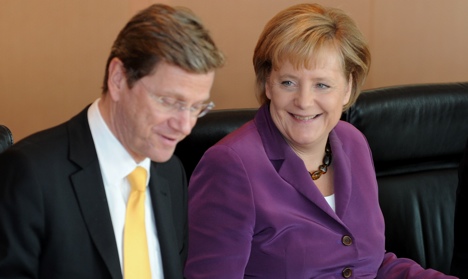 The leader of the liberal Free Democrats, the junior coalition partner to Merkel’s conservative Christian Democrats, seemed eager to snuff out any suggestion of another rift in the German government by writing an article for Saturday’s edition of the newspaper Die Welt.

The article took trouble to emphasize the common ground between the two parties on the European Union’s Stability and Growth Pact.

On Thursday, Westerwelle had distanced himself from a new agreement between Merkel and Sarkozy, which declared that EU member states that break deficit regulations should not be punished automatically, but only after a grace period.

Westerwelle had commented that a strong euro must be supported by a tough deficit regulation, but on Saturday he said that the agreement represented a “solid foundation” towards reaching a fair sanctions mechanism for countries running a persistent deficit.

“Now we have to make sure that the European Council takes up this suggestion,” he wrote.

Westerwelle also said that the EU needs a new crisis-management mechanism for all states in financial need. “This is the German government’s declared common aim for the negotiations,” he said.