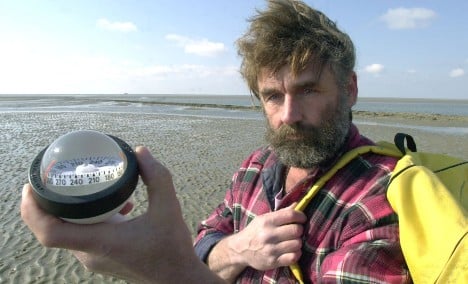 Knudsen, a 55-year-old with a bushy beard, looks encouragingly at a small group from Bavaria that has gathered on a seaside dyke ahead of his delivery. Despite the wet and chilly weather, they have met to follow Knudsen on his seven-kilometre delivery route to the tiny island of Hallig Süderoog, where Gudrun and Hermann Matthiesen await their mail.

“Are we ready to go?” he asks, setting off with the group trailing behind.

While other postal workers in the Wattenmeer region use small skiffs and boats to reach people living on nearby islands, Knudsen, outfitted with just a rucksack, compass, mobile phone and watch, is the only one who times his deliveries at low tide to go on foot.

“I take the Matthiesens everything,” he says. “Only when Hermann orders something like a new refrigerator does he have to pick it up himself with a boat.”

The postman also brings fresh food to the couple on the 1.1-kilometre-long island, who gladly welcome him and his followers into their home.

“In winter he is often the only person we see for weeks at a time,” Hermann Matthiesen says.

Knudsen, born on the nearby island of Pellworm, which belongs to the state of Lower Saxony, is hardy and undaunted by the weather in any season. Despite wading through hip-deep water in some parts of his trip, he only wears waterproof boots and trousers in the winter months after November.

“Of course I prefer the walk in summer, but every season has its allure,” he says. “It’s only during storms that I won’t go – that would be stupid.”

During the summer groups of up to 100 people from around the country gather to join Knudsen on his journey.

“I always have to grin when city people show up in long jeans even though shorts have been recommended,” he says. “They’ll chafe, but everyone is responsible for themselves.”

The postman also enjoys the trek alone, when he says the sounds of the Wattenmeer, also known as the Wadden Sea, can best be heard.

“This is so much more than a job for me,” he says. “It’s a form of relaxation and revival, and keeps me fit.”

But the job, which pays just €5 per hour, is not enough to sustain Knudsen, who also works as a hydraulic technician for the state’s national park protection agency in the coastal area, repairing dykes and building breakwaters.

The Wattenmeer tidal mudflats are feeding grounds to millions of migratory birds and a unique ecosystem honoured as a world natural heritage site by UNESCO in 2009.