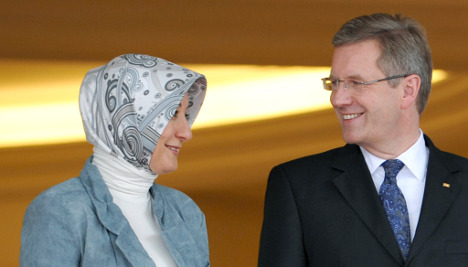 Leaders were impressed by Wulff’s carefully chosen words on Tuesday that aimed to build bridges with Turkey while also reminding the predominantly Muslim nation of its obligations to protect its own religious minorities such as Christians and Jews.

Education Minister Schavan, meanwhile, sought to drag the recent, acrid debate about the integration of Germany’s Muslim communities onto more constructive territory, insisting the news was not all bad.

“Integration is also a success story in Germany,” she told the Passauer Neue Presse. “We should speak about that more and with greater confidence.”

The remarks followed a weekend speech by Angela Merkel in which the chancellor declared that multiculturalism had “completely failed” and calls by Bavarian Premier Horst Seehofer for Germany to consider ending immigration from Muslim nations.

President Wulff also won applause in Turkey. The country’s President Abdullah Gül described himself after the speech as president also for the Christians in Turkey.

The head of the Turkish Community in Germany, Kenan Kolat, was also full of praise.

“The President has spoken out for a close business and scientific co-operation with Turkey. He has made clear that Islam is compatible with democracy. And with his emphasis on Turkey’s role as a bridge (between east and west), he has established the foundation for the country’s entry to the European Union,” Kolat told the Berliner Zeitung.

He called on Wulff to now meet also with Turkish community representatives in Germany.

The Central Council of Muslims in Germany also reacted positively.

He contrasted the integration debate in Germany with that of the religious minorities in Turkey: “Just as Turkish Christians are regarded as a danger for the country’s unity by ultranationalists, the right-wing in Germany sees behind every Muslim the downfall of the Christian West.”

The head of Turkish Studies and Integration Research at Essen University, Haci Halil Uslucan, praised the way Wulff had stressed the common ground between Germans and Turks, rather than “letting an unnecessary distance arise between the majority and minority.”