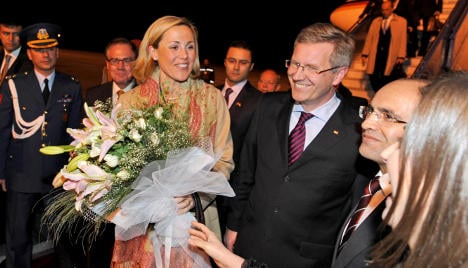 In the wake of Chancellor Angela Merkel’s tough rhetoric at the weekend, when she claimed that multiculturalism had “utterly failed,” Wulff stressed that Germany was not condemning an entire community.

“I consider it wrong to claim that a whole group cannot and does not want to integrate,” he told Turkish newspaper Hürriyet, in an interview published Tuesday. “I am against any blanket judgement.”

Wulff also called on Turks living in Germany to learn the German language, become familiar with the constitution and respect German social standards.

“State and society must offer the possibility to integrate,” he said.

The offer however must be grasped by individuals to whom it was being made, he added. Immigration to Germany had produced problems.

“In strictly religious milieus, there are unacceptable instances of isolation and ideas on this important theme that are not compatible with our legal system,” he said.

Wulff will on Tuesday become the first German president to address the Turkish parliament in Ankara.

His four-day trip is also the first visit by a German president to Turkey in a decade. Wulff is due to meet with President Abdullah Gül and Prime Minister Recep Tayyip Erdogan before he gives his speech in the Turkish parliament.

Germany has four million Muslims among its 82 million inhabitants. Turks form the largest ethnic minority with a 2.5-million-strong presence. While many later generation Turks have integrated with German society, large sections have never learned German and live in closed communities.

In a speech this month, Wulff said Islam was “now part of Germany” but also urged his countrymen and immigrants to make an effort at integration.