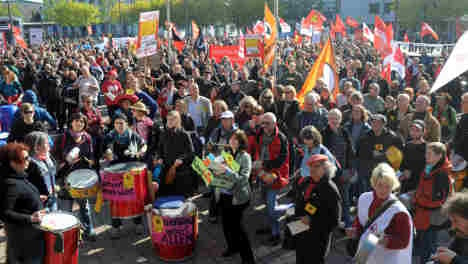 “People in this country want to take part more and more, but not simply via elections or in parties,” said Wichard Woyke, political scientist at Münster University.

Germans want to have a direct effect on particularly large projects which have a direct influence on their day-to-day lives and quality of living, he said.

“This is currently illustrated by the mass protests against the station in Stuttgart just as much as with the school reform in Hamburg, the airport in Berlin or also in Gorleben, where the citizens have been demonstrating for decades against the establishment of a final storage place for nuclear waste.”

What is new, is that people from a broader social spectrum are taking part in these demonstrations – and from all political standpoints.

“You see a nurse next to a lawyer, a Green next to a CDU voter, a pensioner next to a young person,” said Woyke.

And people fighting local battles are helping each other he noted, saying that recently 30 opponents of the nuclear waste storage facility in Gorleben have said they will drive their tractors to Stuttgart.

The growing numbers of mass protests should prompt politicians to strengthen their efforts to explain their intentions to the voters.

“It is very important that the citizens feel involved in decision-making,” said Woyke. That is the only way people can feel included in the parliamentary democratic system, he said.

The weekend saw thousands on the streets in Berlin protesting the government’s policies of cutting Hartz IV social provision and the financial crisis policies in general.

Despite the absence of any prominent speakers, or the involvement of political parties or trade unions, the demonstration drew around 7,000 people to the city centre on Saturday.

Those fighting the Stuttgart 21 rail construction project briefly occupied part of the central station on Saturday evening too, while around 20,000 people gathered on the streets despite rainy and chilly weather.

More than 3,000 blind and vision-impaired people demonstrated in Kiel against the halving of support payments from the Schleswig-Holstein state government.

The monthly payment of €400 is set to be reduced to €200 as part of the state’s budgetary savings plan. The demonstrators included representatives of the churches and opposition politicians.