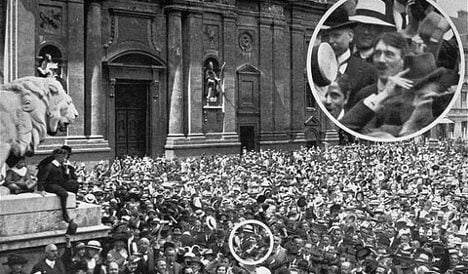 Düsseldorf historian Gerd Krumeich has studied the picture and its history and concluded that Hitler was superimposed to lend credibility to the image of the Nazi leader as a patriot and a man of the people, daily Die Welt reported Thursday.

The photo was taken by Munich photographer Heinrich Hoffmann at a rally in support of war against the allies in Munich’s Odeonplatz on August 2, 1914.

But it was not until March 12, 1932 that it was published in the Nazi party newspaper the Illustrierte Beobachter, or “Illustrated Observer,” the day before the presidential election, after Hitler’s opponents had attacked Hitler over his flight from military service in Austria-Hungary and questioned his patriotism.

The caption on the picture read: “Adolf Hitler, the German patriot … in the middle of the crowd stands with blazing eyes – Adolf Hitler.”

The photo went on to become a favourite Nazi propaganda picture, appearing with captions such as “Adolf Hitler: a man of the people.”

Hoffmann, who was one of the founders and the main supplier of pictures for the Nazi paper, always claimed he had discovered Hitler in the photo by chance after the future Führer visited his studio in 1929. Hitler had told him he was at the rally, Hoffmann said.

Hoffmann then dug out a glass picture negative he’d planned to throw away and found Hitler in the image.

“I only needed to search for a very short time, one standing there, yes, it’s him – his hair falls over the forehead,” Hoffmann once said. “His face cannot deceive – it is him.”

Until now, that version has been regarded as fact. The photo of the future Führer in Odeonplatz has been used countless times in newspapers, Hitler biographies and school books.

Most damningly, Krumeich found a different version of the picture in the Hoffmann photo archive in Bavaria. In that image, Hitler’s characteristic lock of hair over the forehead looks clearly different – suggesting the photo had been retouched.

The glass plate negative to the picture has never been found.

Krumeich has looked for other photos of the same rally both in archives and in newspapers and books. He noticed that other pictures of the event taken from different standpoints, including a picture taken by Hoffmann, do not show Hitler.

The picture is included in the new exhibition, “Hitler and the Germans – Nation and Crime,” which opens Friday. The caption on the picture mentions the doubts about its authenticity.