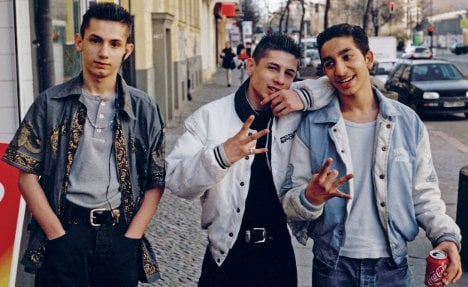 Like no other thoroughfare in Berlin, Flughafenstraße in the Neukölln district is a street marked by a new influx of Bulgarian and Romanian Roma families who have come to Berlin since their countries’ accession to the EU in 2007.

Up and down the street, which stretches from Karl-Marx-Straße to Hermannstraße, you can find tacky new nightclubs with names like “Sofia” advertising well-known Bulgarian Gypsy chalga singers. Intermingled with Turkish bistros, Arab shops, African hair salons and second-hand furniture stores are brand-new bordellos with flashing red lights operated by the Bulgarian mafia.

No one knows exactly how many recent arrivals there are, but everyone has stories about Gypsies in this part of Neukölln. Zoran Markovic, owner of a Serbian music and grocery store called “Kod Zoran – Balkan Spezialitäten,” has been running his Flughafenstraße shop for more than two decades.

“The Gypsies are the worst,” says Zoran. “Especially the Bosnian Gypsies. They come in here and steal everything. I had a Gypsy woman come in here the other day with a baby in her arms. I watched her steal a CD and stick it under her baby. I said, ‘Give me the CD.’ She said, ‘What CD?’ I took the CD from out under her baby and hit her over the head with it and told her, ‘Get out of here! Before I call the police’.”

“There’s no doubt about it, the Gypsies steal the most,” says Metin, who works in a family-run Späti nearby. “They come in with their babies, don’t speak any German. It’s clear they are Gypsies.”

“Of course they steal,” says Hamze Bytyci, an activist from a Roma advocacy group called Amaro Drom, which this past September organized a “Roma Action Day” aimed at drawing attention to the problems faced by Balkan Roma families in Neukölln.

“They have no choice. But let’s not forget that these Roma from Bulgaria and Romania have been driven here by the EU. For years now, the EU has been dismantling the traditional jobs of the Roma in Bulgaria. These people have no other choice but to come to the rich West. And some of them do steal.”

For centuries, Roma have lived in large numbers in eastern Europe and the Balkans, sometimes in harmony with their neighbours and sometimes suffering overt persecution.

But one thing is clear: in countries like Serbia, Bulgaria and Romania, the Roma belong to the cultural and physical landscape. They intermarry, play music at gajo weddings and funerals, and live in Roma mahallas (ghettos) or else side-by side with their Slavic neighbours, making money and prospering like everyone else. They are nothing new.

Now western Europe has a ‘Roma problem’. Since Romania and Bulgaria joined the EU, countries like France, Italy and Germany have been finally making contact with the Roma people, who number about 10 million, constitute Europe’s biggest minority, and are testing its alleged principles of tolerance and multiculturalism.

In Italy, on the outskirts of Rome, Roma camps were cleared out by the police last year. Now Sarkozy’s France is at the center of a scandal over the systematic and accelerating deportation of Roma back to their home countries. Germany does not have large Roma encampments to speak of, but when some 50 Roma from Romania set up camp in Kreuzberg’s Görlitzer Park last summer, police were quick to disperse them; they were hunted from site to site until finally the families were flown back to Romania.

The first Roma to come to Germany were from the Balkans and arrived with the Gastarbeiter of the 1970s and 1980s. According to Südost Europa Kultur, an organization that promotes Balkan culture in Berlin, these Roma are now fairly integrated and spread out throughout the city. The next wave came with the war in Bosnia. Many Roma – particularly from the town of Bijeljina – came to Berlin as refugees, then forced to leave when the conflict ended.

However, many returned to Berlin by hook or by crook, and many of these Gypsies from the 1990s now live in Neukölln and Wedding. The most recent wave consists of Romanian and Bulgarian Roma, who live predominantly in the “Schillerkiez” area of Neukölln.

According to the Berlin Institute for Population and Development, there are 120,000 Roma in Germany. Up to 20,000 are estimated to live in Berlin.

A burning issue is the fate of the more than 130,000 Roma who fled Kosovo in the wake of intense persecution, including arson attacks and expulsions. Many of these came to Germany. Under a deal signed in April, 14,000 refugees are to be returned to Kosovo – 10,000 of whom are Roma.

“Now, 10 years on, Germany is trying to deport the Roma living here. Most don’t want to go; 4,000 have already been deported,” says Hamze Bytyci of Amaro Drom.

According to Unicef, half of the Roma to be deported are children, most of whom were born and raised in Germany. But unlike France’s Roma (who mostly originate from, and have been expelled back to, Romania and Bulgaria), they do not have the right to return because they are not EU citizens.

Bytyci is himself a Kosovan Roma. He came to Berlin as a refugee during the war and married a German. “Seventy years ago, Roma were killed by Nazis in this country,” he says. “And Germany was massively involved in supporting the nationalist forces in Kosovo and the UÇK [Kosovo Liberation Army], which resulted in the expulsion and persecution of Roma. We think that Germany has a responsibility towards these people.”

But it seems no one wants the Roma. The media in Berlin, be it B.Z. or Bild, focuses on Gypsy squeegee gangs and Gypsy petty crime, presenting a stereotypical and overwhelmingly negative picture of the city’s Balkan Roma. And then there is Heinz Buschkowsky, the controversial mayor of Neukölln, who – while never explicitly singling out the Roma – spoke at length about his so-called “problem families”.

His threats to cut Kindergeld in half has succeeded in riling up many Neukölln Roma, who tend to have a lot of children and often live off of the state.

“And the latest thing is that he wants to make all our children go to kindergarten. Children should stay with their parents. It just means that people with children will leave Neukölln… It’s like fascism,” says Slavisa Markovic, a Neukölln Roma from Niš, Serbia, who runs Rroma Aether Klub Theater with his brother. “Heinz Buschkowsky can go to hell. You can tell him a Zigeuner said that.”

While Roma might have a hard time ‘integrating’ into Germany’s society and school system, Germans are not making the process any easier: Markovic recalls that finding a space for his café/theater wasn’t easy. “We said we were Roma. ‘Roma?’ they said. ‘You mean you come from Rome?’ ‘No, like Gypsies,’ we said. ‘Zigeuner’. ‘Oh, no, please – we have enough problems as it is.’”

It is a Saturday night in Neukölln in mid-September. The day has been marked by rallies and demonstrations: an anti-nuclear power demo at Hauptbahnhof, a neo-Nazi rally in Schöneweide and an open-air anti-police hip-hop concert in Neukölln organized by Autonomen and immigrant groups.

And today, September 18 – although not many people know it – is Roma Action Day and Neukölln Roma have been meeting to discuss issues amongst themselves or with journalists and town-hall officials. Now it’s party time.

Niko, a Romanian Roma with long sideburns and tattoos, takes the stage in the cellar of Shangl Hangl Musikcafé, a popular hangout for Gypsy musicians. He treats the mostly Roma crowd to some fierce Balkan accordion riffs and emotive singing, before ceding his spot to a four-piece Gypsy-style jazz outfit. The dancing continues late into the morning.

People puff on joints and sip shots of slivovitz. Niko takes a breath of fresh air outside. He doesn’t want to talk to journalists about the Roma. “Are you going to say something positive or negative?” he asks skeptically. The only thing he will say is that “Sarkozy is an asshole.”

Samir Biberovic – a Roma from the former Yugoslavia who lived in Berlin for a stint during the Yugoslav Wars and was then deported, only to come back again – is more open. He speaks of lively Gypsy parties in Roma nightclubs in Kreuzberg and Neukölln, scandals and fights and well-known Roma personalities (like Refik Petrovic, the owner of Hollywood, a popular Yugo disco on Potsdamer Straße that’s popular among Bosnian expats. Petrovic came here in 1990s from Bijeljina as a refugee, and made money selling cars before buying a club).

“What bothers me,” says Biberovic, “is that all we see in the media are pictures of poor Gypsies. We never see any pictures of the rich ones. And there are successful Gypsies, both down in the Balkans and here in Berlin.”