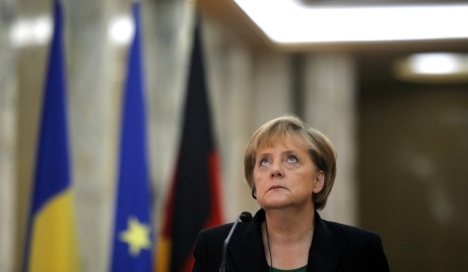 Merkel’s junior coalition partners the Free Democrats (FDP) dropped one point to an abysmal four percent support, meaning they would even fail to win seats in the Bundestag. Germany’s electoral hurdle that requires a party to take at least five percent of the vote in order to curb the influence of fringe parties.

The 33 percent combined support is a record low for the coalition of Merkel’s conservative Christian Democrats and their Bavarian CSU allies together with the pro-business FDP, even after months of bad polls that seemingly couldn’t get worse.

The survey by the Forsa institute for Stern magazine and broadcaster RTL also revealed the continuing rise of the environmentalist Greens, who scored 25 percent support, putting them not only clearly in front of the main centre-left opposition party the Social Democrats, but also in striking distance of the CDU.

The Greens have seen their support soar amid anger over the government’s support for the controversial Stuttgart 21 rail project and its extension of the lifespans of Germany’s nuclear reactors.

After winning a mandate just over a year ago with a combined 48.4 percent of the popular vote, the “black-yellow” coalition has now lost nearly one in six of the voters who supported them at the September 2009 election.

“It’s people from the centre who reject a shift to the right by the CDU-CSU,” Forsa director Manfred Güllner told Stern.

The protests against Stuttgart 21, in which demonstrators have been injured by police water cannons and pepper spray, had strengthened the feeling among some voters that politicians cared too little about the people, he said. Merkel’s coalition could no longer point to its economic record, Güllner added, because real incomes were falling.

The centre-left Social Democrats, who might be expected to capitalise on the woes of the coalition are instead languishing on 23 percent, meaning they have made no gain at all since the last election. Together with the Greens, they could form a majority if an election were held this weekend.

The social Left party gained two points compared with a week ago to reach 12 percent, while the minor parties together made up 7 percent.