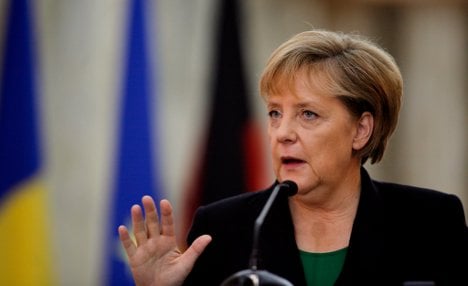 “We are greatly interested in the release of both citizens,” Merkel told reporters in the Romanian capital Bucharest when asked for reaction to the reports that two German journalists had been arrested in the Iranian capital on Monday.

“The Foreign Ministry is doing everything it possibly can,” she said, adding that Berlin had no new information on the incident.

Iranian officials said on Tuesday that the two foreigners had been arrested for posing as journalists and interviewing the son of a woman facing execution by stoning. They were also suspected of having links with anti-revolution groups.

“Because of that they have been arrested and their case is being looked into,” he said in remarks translated in English by Press TV channel.

Mehmanparast insisted that the two posed as reporters and had been “preparing a report” of their meeting with the family of Sakineh Mohammadi-Ashtiani, who is facing death by stoning over charges of adultery.

Iran’s public prosecutor Gholam Hossein Mohseni Ejeie had on Monday announced the arrests of the two foreigners, hinting that they were Germans. He said the two had entered the Islamic republic as tourists and were “now in custody” after they had asked the son of Mohammadi-Ashtiani some questions.

“An investigation by official authorities showed these people are not journalists and they have been arrested for faking their journalistic status,” Ejeie was quoted as saying by the website of Iranian state television Monday.

He strongly hinted the detainees may be two Germans by linking them to a Iranian human rights activist, Mina Ahadi, who had raised the alarm about the arrests from her base in Germany.

On Tuesday, Mehmanparast too indicated that the two foreigners are Germans.

“Some sources say they are Germans. The anti-revolution current that made preparation for referring them to Mohammadi’s house, that political current is in Germany,” he said.

He was referring to Ahadi, founder of the International Committees against

Execution and Stoning which is based in Germany.