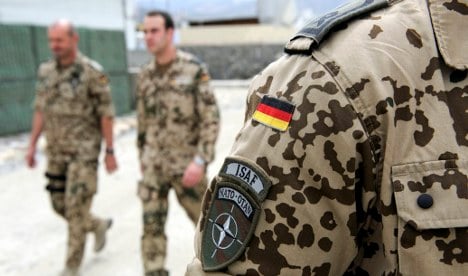 In a statement to the lower house of parliament, or Bundestag, Guttenberg said his thoughts were with the soldiers and their families.

Two of the injured soldiers were reportedly in critical conditions. The attack on the German ISAF patrol comes exactly nine years since the war in Afghanistan began.

It happened north of Puli Khumri, the capital of Baghlan province about 10:20 am German time. Jürgen Hardt, member of parliament for the conservative Christian Democrats, said the patrol had returned to its base with the injured.

“I can confirm one German soldier has been killed and six others have been wounded,” Stephan Wessel, a spokesman for German troops based in northern Afghanistan, said. “It was a suicide attack.”

According to the governor of the Baghlan province, Munshi Abdul Majid, the bomber detonated an explosive device attached to his body next to the German military convoy near Puli Khumri.

Majidsaid that much of the area was controlled by German checkpoints and barricades. Germany has soldiers stationed in Puli Khumri whose job it is to train Afghan soldiers.

The Taliban had claimed responsibility for the attack and declared that the bomber had killed eight foreign soldiers with the attack. Such claims by the insurgency are routinely exaggerated.

The soldiers had come under fire from Taliban insurgents repeatedly in recent days, Bild reported.

In his statement to parliament, Guttenberg said the soldiers were “providing our security.”

The death brings the number of German soldiers killed in war-torn Afghanistan to 44 – 27 of whom have died in attacks or combat encounters. In April, seven soldiers were killed in two separate attacks.

Germany is the third largest contributor of foreign troops to the US-led NATO force fighting a nine-year Taliban insurgency in Afghanistan. According to the International Security Assistance Force (ISAF) website, Germany has around 4,590 soldiers in Afghanistan.