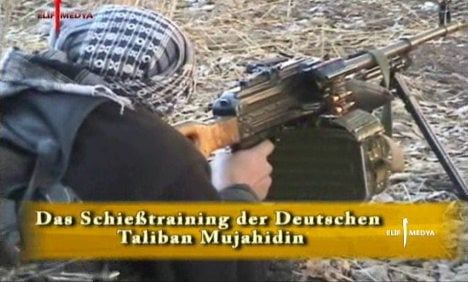 “We are taking things seriously. But public accompanying music is also something that terrorists use, because they want to spread fear,” de Maiziere told radio station Deutschlandfunk. “We are working without talking a lot.”

This week the United States, Britain, Japan and Sweden issued alert warnings of the “possible terrorist attack” by al-Qaida and affiliated groups against their citizens travelling in Europe.

This followed reports in British and US media that said that an Al-Qaeda plot to carry out attacks in Britain, France and Germany, similar to the assault in Mumbai in 2008 that killed 166 people, had been uncovered.

The source was a German citizen of Afghan descent being held in Afghanistan, the reports said, but a US official told news agency AFP this week that the updated travel advice was based on a “growing body of information” collected over time.

The captured man was one of a large number of Germans authorities say are travelling to Pakistan’s tribal border region for Islamist training, either to fight NATO forces there or to return home and carry out attacks.

The man, Ahmed Siddiqui, is also reported to have known Mohamed Atta, one of the hijackers in the September 11, 2001 attacks, and to have visited the same Taiba mosque – known previously as al-Quds and closed in August – in Hamburg.

A US drone strike this week in North Waziristan, a purported hideout for foreign and homegrown militants linked to the Taliban and al-Qaida, killed at least five and possibly as many as eight Germans, Pakistani security sources said.

De Maiziere declined to confirm that those killed were German, saying he was “amazed” by reports that the men’s passports had been found, even though it was an unmanned strike in a remote area.

Reports said some of those killed belonged to a group of Islamists from Hamburg, one of whom was arrested by Pakistani authorities in June together with the owner of the farmstead that was bombed.

German authorities in June put the number of people living in Germany who have attended such camps, or who intended to, at around 200 since the early 1990s, of whom 65 received training.

De Maiziere said that “no one should fool themselves that Germany is not also a target for terrorists,” but that there were no “concrete indications of plans for any imminent attack.”

Germany, which has around 4,800 soldiers in Afghanistan and a four-million strong Muslim community, has never suffered a “terror” attack.

In 2006, suitcases with homemade bombs inside were placed on two German trains but they failed to detonate, and in 2007 three Islamists planning to attack US targets in Germany were caught with explosive chemicals.

Ingo Peters, an expert in international relations at Berlin’s Free University, told AFP that Europeans and Americans had different assessments of the risks, partly because of the “trauma” of September 11, 2001.