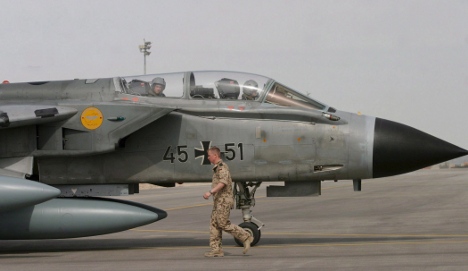 The federal government plans to end the deal by 2013 and perhaps earlier, when it decommissions its ageing Tornado fighter jets, which are equipped to drop the nuclear bombs, the Rheinische Post reported.

At present, the Tornado fighters, stationed at the Bundeswehr base at Büchel in the Mosel region, are ready to drop the estimated 22 American-owned nuclear bombs stored on German soil. Those bombs are housed at the the Büchel base, guarded by US soldiers.

But the Tornado jets are due to be decommissioned and the Rheinische Post reported that Germany would not continue the so-called NATO “nuclear sharing” agreement.

While the change is being driven primarily by budget cuts, it also takes Germany a step closer to getting rid of the remaining nuclear weapons on its soil – a fervent goal of Foreign Minister Guido Westerwelle’s.

But Germany’s move is likely to spark a row within NATO, which wants to continue with the policy of nuclear deterrence, the paper reported.

The bombs in Büchel are the last nuclear weapons on German soil, according to the report. While authorities will not confirm their number, it is believed to be 22.

The Tornado squadron was supposed to be replaced by the new Eurofighter. But the new jet would have needed to be redesigned to be capable of carrying the nuclear weapons. Because of the recent tough budget cuts in defence and other areas of government spending, it was decided that the “nuclear sharing” squadron be abandoned altogether.