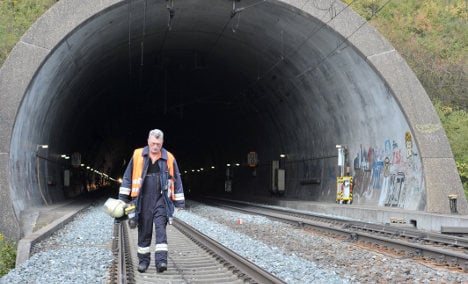 A technician walks out of the Neuberg Tunnel on Monday. Photo: DPA

The ICE 738 train out of Hamburg was between Frankfurt and Würzburg when a man reportedly jumped onto tracks in an open space between tunnels. It was likely a suicide attempt, police said.

The emergency stop caused an engine malfunction inside the Neuberg Tunnel some eight kilometres from Würzburg.

Though the train’s technical systems seemed to be in order, for some reason conductors could not get it to start again, police said.

About 600 passengers were forced to wait out the delay for almost two hours on board the train.

None of the passengers were injured during the sudden stop, a police spokesperson said.

“But the train driver is in extreme shock,” he added.

Deutsche Bahn rerouted several other high-speed trains due to the problem, reporting delays of between 10 and 12 minutes.

Police did not provide more details on the suicide attempt.

The incident came several weeks after 420 passengers were caught in a Baden- Württemberg tunnel after a train engine malfunction in late August.