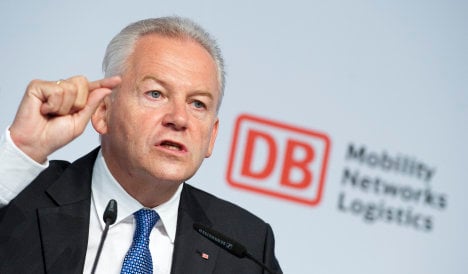 In a guest opinion piece for Bild am Sonntag, the head of Germany’s national rail provider said Stuttgart 21 was legitimate from a democratic standpoint and rejected opponents’ “right to resist” the project.

“In our country, parliaments decide, no one else,” Grube wrote, drawing a parallel German to reunification.

“On the 20th anniversary of our national unity, it’s worth remembering what the brave people in East Germany were fighting for: for democracy and the rule of law,” he said. “What does that have to do with the Stuttgart 21 rail project? A lot!”

In a counter-commentary to Grube’s statements, Green party co-leader Cem Özdemir said improvements to Germany’s rail system should be pursued in “intelligent and economically sensible” ways, “not à la Stuttgart 21.”

Özdemir said the true costs and risks associated with the project were still unknown when it received parliamentary approval. “Now the real facts are increasingly coming to light,” he wrote, calling for construction to stop until a public referendum can be held.

The project has become increasingly unpopular among residents in Baden-Württemberg’s state capital, with demonstrations growing larger and more intense as construction proceeds.

The €7-billion project aims to make the city part of a 1,500-kilometre high-speed rail route across Europe. Stuttgart’s terminus will be transformed into an underground through-station – requiring a dramatic re-landscaping of the Schlossgarten.

In an interview with Germany’s Welt am Sonntag published on Sunday, Baden-Württemberg’s state premier Stefan Mappus said failing to move forward with Stuttgart 21 would constitute a setback for the state’s infrastructure.

“We would lose a unique chance to connect Stuttgart to the international high-speed network,” he said.