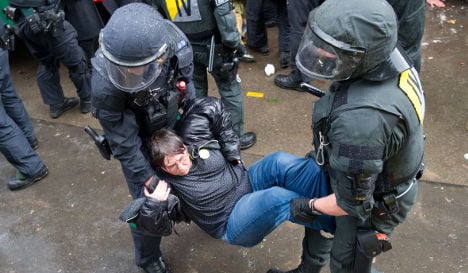 Demonstrators said that several hundred people had been injured when police used water cannons, pepper spray and batons to break up the crowds blockading the work site.

The police said 116 protestors had been injured, 10 of whom had to be taken to hospital. Several police were also injured, they said.

Shortly after 1 am, Stuttgart 21 workers began cutting down the first 25 trees to clear the area for construction work. Some 300 will be felled over coming weeks.

Nine demonstrators attempted to climb and occupy the trees designated for clearing but they were removed by police. Many demonstrators attached themselves to the trunks and branches of other trees.

There were also isolated cases of demonstrators throwing stones at police.

Some 99 people were treated by the German Red Cross (DRK), 80 of them for irritated eyes. Ten were taken to hospital. Police said that six minors were among the injured: four 16-year-olds, a 14-year-old and a 12-year-old.

Demonstrators put the total number of injured at several hundred. About 1,000, furthermore, had suffered some form of eye irritation, they said. A teenage girl had suffered a concussion, they added.

“The police are extremely aggressive,” a spokeswoman said.

A particular row has erupted over the role of children and teenagers in the demonstrations. Police said that youngsters who had been taking part in an education demonstration broke through police barriers and joined the Stuttgart 21 protest.

Interior Minister Rech defended the police actions. His spokeswoman Alice Loyson-Siemering said: “The aggression came from the demonstration and not from the security forces.”