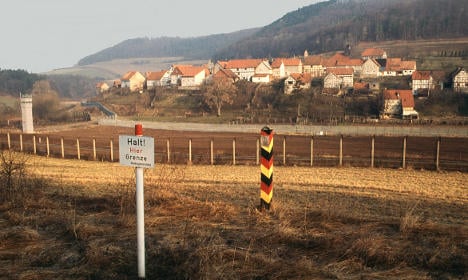 Jürgen Ritter, a 61-year-old telecommunications technician, grew up close to the border in town of Barum, which was then in the West German state of Lower Saxony.

He began photographing the length of the wall in 1982, working from north to south, “always in search of the beautiful picture that sticks in the throat,” he says. It took about two years to work down the almost 1,400-kilometre death strip section by section, travelling at weekends and holidays armed with only a map and his camera.

He ended up with some 40,000 photographs, publishing his prophetically titled first book Nicht alle Grenzen bleiben, or “Not All Borders Remain,” shortly before the Berlin Wall fell in 1989.

Six years ago he resumed the project, photographing the same locations. The results are a monument to change, with the contrast between the original black and white shots and the more recent colour telling a vivid story of how quickly the country has changed since reunification in 1990.

As the 20th anniversary of reunification draws near, these photographs, alongside those from his first book, have been published on his website under the project title Die Grenze – damals und heute, or “The Border – Then and Now.”

Ritter was awarded the citizen’s prize for German unity by the Federal Agency for Civic Education in 2007 for his “far-reaching, unique and intensive documentation of both the divided and unified Germany.”