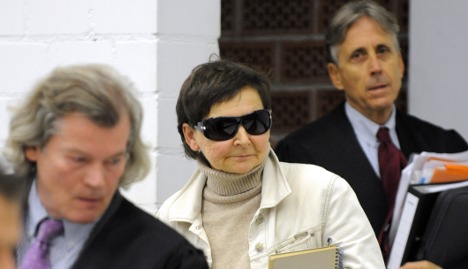 Verena Becker, a former member of the murderous “anti-imperialist” outfit, better known by Germans as the Red Army Faction (RAF), is accused of involvement in the murder of the country’s most senior public prosecutor.

Siegfried Buback was killed along with two others when a still unidentified person on the back of a motorcycle sprayed his chauffeur-driven limousine with bullets on April 7, 1977 in the southwestern city of Karlsruhe.

It was one of several RAF operations in what became known as the “German Autumn” as the Gang pressed for the release from jail of its “first generation” of leaders, Andreas Baader, Gudrun Ensslin and Jan-Carl Raspe.

That June the RAF then shot dead the head of Dresdner Bank, in September they kidnapped industry federation head Hanns Martin Schleyer, and in October a Palestinian gang with links to the RAF hijacked a Lufthansa aircraft.

The 1977 peak of the RAF’s campaign against what it considered the oppressive West German capitalist state – with former Nazis like ex-SS officer Schleyer still in positions of influence – rocked the country to its core.

“In November 1977 I didn’t have much trust in the stability of the nation,” then-chancellor Helmut Schmidt admitted in a 2008 newspaper interview.

Thirty-three years later Germany is a unified and stable country. RAF violence continued through the 1980s but petered out in the 1990s before it disbanded in 1998, having been responsible for 34 deaths.

She was sentenced to life in prison in 1977 for other RAF activities, but pardoned and freed after 12 years. Her involvement in Buback’s death was never proved and the case was closed in 1980.

This was despite the fact that the murder weapon was found in a car that had been used by her. Buback’s son, Michael Buback, even believes that the “petite woman” seen by witnesses on the back of the bike in 1977 may have been her.

“I hope that we will learn the truth at last,” he says.

The case was reopened in 2008 when forensic technology not available to police in the 1970s allegedly turned up traces of Becker’s DNA on a letter by the gang claiming responsibility for the three killings.

Becker was re-arrested in August 2009, released on bail in December and charged in April with “conspiracy” to murder Buback and his two companions.

The 58-year-old is not accused of firing the fatal shots.

The trial will be held at Stammheim outside Stuttgart in southwest Germany — the same place she was convicted in 1977, and not far from the prison where her former comrades-in-arms died.

If convicted, Becker faces in theory a life sentence, but in view of the time already served behind bars she would likely receive substantially less. A verdict is due at the end of December.