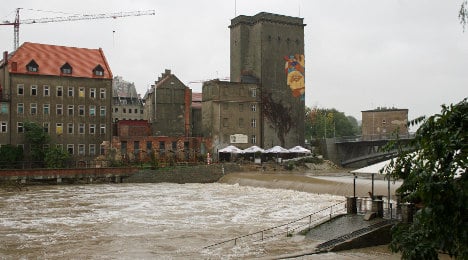 Seven weeks after the area suffered severe flooding, the districts of Görlitz and Meißen were on high alert as officials monitored the tense situation.

By Tuesday, up to 100 millimetres per square metre of rain had fallen in the area, officials estimated. The water was not draining but rather collecting in fields and meadows, created flooding.

Once again, the Neiße river was posing particular dangers. In Zittau, the water gauge stood at 3.57 metres at 4:30 am, triggering a stage four alert, the highest level.

In Görlitz the Neiße reached a level of 5.74 metres, also corresponding to stage four. The water level during the severe floods of August stood at more than seven metres at this point.

The highest alert level was also reached in the Schwarze Schöps, a tributary to the Spree river in Krobnitz and Jänkendorf where the water reached 3.05 metres and 2.10 metres respectively. Another section, the Weißen Schöps, also reached stage four.

In the district of Meißen, the emergency alarm was also sounded with stage four water levels recorded in Großdittmannsdorf and Kleinraschütz. Streets were flooded in Großenhain.

For now, there were no problems with the dykes that contain the rivers, in either the Görlitz or the Meißen districts.

The German Weather Service (DWD) however has issued storm warnings.

A spokesman for emergency services told broadcaster Görlitz and Meißen that about 40,000 sandbags were ready to be used in Zittau and Niesky.

The water gauge on the Elbe river was also rising strongly.

At the beginning of August, floods caused several hundred million euros’ worth of damage in eastern Saxony. The dyke that broke on that occasion is under close observation, officials have said.