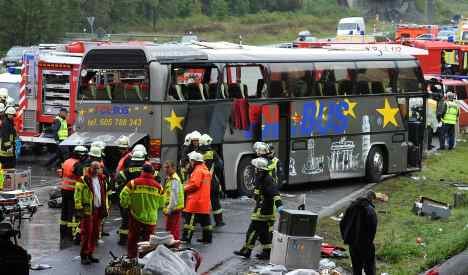 Initial reports suggested the bus driver was trying to avoid a car which was coming onto the motorway, lost control and smashed into the column of a bridge.

The accident occurred on the A10 between Rangsdorf and Schönefeld. The motorway was closed while around 250 emergency workers, some in rescue helicopters, tried to get people out of the bus and to hospitals.

Peter Salender, spokesman for the police in Frankfurt an der Oder said there had not been such a serious accident with so many dead in the region for a long time.

Police said the bus was Polish and was on the way to Poland from Spain.

Around 30 people are said to be injured, seven of whom are seriously hurt.