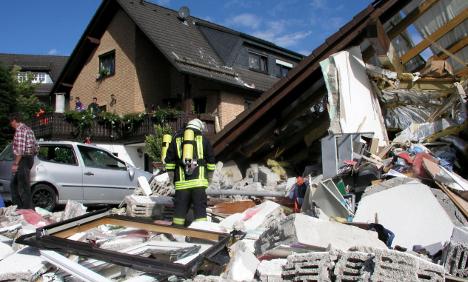 The single family home in the populous state of North Rhine-Westphalia blew up around 9:30 am.

The 45-year-old man killed in the explosion was in the home’s cellar at the time. His brother, 47, and two nephews, aged 19 and 24, were all in the upper levels of the house and were buried in the debris.

More than 50 fire fighters and police officers rushed to the scene to help pull the victims out of the wreckage.

The 47-year-old father and owner of the home was flown to a nearby hospital with severe burns, but his injuries were not life-threatening, authorities said.

The cause of the explosion, which completely destroyed the home, remains unclear.