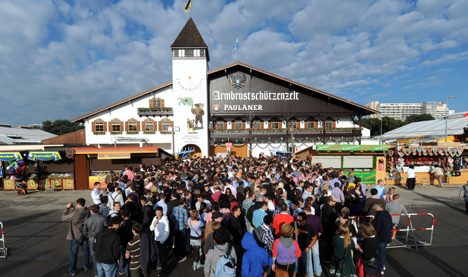 Munich’s mayor Christian Ude was to launch the German extravaganza that is “Oktoberfest” by “tapping”, or opening up, the first beer barrel on the stroke of midday, following a tradition begun in 1810.

As a nod to the historic nature of this year’s event, billed as the world’s biggest people’s party, the festival has been extended by two days and expanded to include special grounds for horse races and exhibitions.

A historic reconstruction of the Bavarian festival in former centuries including an old Oktoberfest tent also aimed to pull in the punters, especially younger visitors less interested in the beer fest’s main draw.

For those who come for the amber nectar, however, six of the southern city’s breweries have set aside their usual rivalry to brew jointly an ale from a prized recipe dating back to the festival’s beginnings.

The city hopes this year to break both its visitor record of 7.1 million and that revellers will do their utmost to break the record of 6.9 million litres of beer downed.

But such historic fun does not come cheap. For the 200th anniversary of the beer festival, the price of a one-litre Maß (“measure”) was upped to a sobering cost of between €8.30 and €8.90.

And for the first time, smokers hoping to enjoy a cigarette with their ale were best advised to leave their packets at home after the state of Bavaria decided to ban smoking across the state in all pubs, cafes and beer tents.

Although the Oktoberfest enjoys a special exception for this year, most beer tents were expected to observe a voluntary ban.

The ban has led one enterprising German to invent a cocktail of microbacteria that “eat” the putrid smell of stale beer and sweat formerly masked by smoke. This was primed to make its debut at this year’s festival.

While this is the 200th anniversary of the beer fest, it is only the 177th edition, as the event was cancelled due to two cholera outbreaks, World War I and II as well as economic and political crises.

The global financial crisis dampened the enthusiasm of revellers last year, with a disappointing 5.7 million visitors coming through the gates amid Germany’s harshest post-war recession.