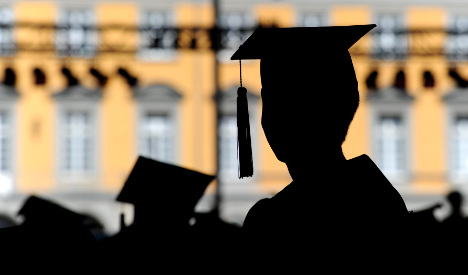 Just 25 percent of young people finish a university course in Germany, compared to an average of 38 percent among the world’s 30 major industrial countries, the Organisation for Economic Co-operation and Development concluded.

Its 500-page report, “Education at a glance,” has highlighted the bleak situation Germany faces in maintaining its high-tech, export-driven economy without bringing in skilled immigrants.

Germany is also lagging in how much it spends on education: it invests just 4.7 percent of its GDP on education, compared with the OECD average of 6.2 percent.

Only Slovakia, the Czech Republic and Italy spend less.

The biggest spenders are the United States, South Korea and Denmark – all of whom spend more than 7 percent of the GDP.

Despite the world financial crisis, the need for graduates has climbed in Germany as it has for all industrial nations, said Heino von Meyer, the German OECD spokesman.

“There is no end to the demands for high qualifications on the worldwide job market,” he said.

Although Germany’s university attendance rate has actually improved in recent years, its youngsters are still the least likely to go to university of all the industrial nations other than Turkey, Belgium and Mexico.

A university degree is the best protection against unemployment and the best guarantee of a high income in all of the countries under investigation, the report said.

In Germany, a graduate earns on average 67 percent more than worker who had on-the-job training. Barely any other country has such a wide gulf.

In the face of falling birth rates in almost all industrial nations, qualification standards urgently needed to be raised to compensate, the report said. The baby-boomer generation that is now starting to retire could not be replaced with the current number of university students and graduates, Meyer warned.

Education Minister Annette Schavan pointed out that according to German figures, 43 percent of people in the age group studied by the OECD were in some kind of post-secondary school study, though that included foreign students from outside the European Union, whose residency prospects were not certain.

Without foreign students included, the OECD report said, 36 percent of young people in Germany were studying.

Schavan stressed that since 2007 the federal and state governments between them had invested €1 billion to enable an extra 90,000 young people to study at university.

“This money is well-spent,” she said.