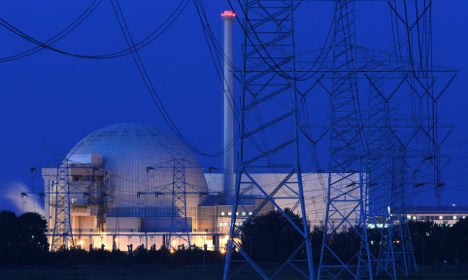 The decision came after 12 hours of talks between senior politicians and means that some of the 17 plants will now be operational until the 2030s.

“The government yesterday approved a far-reaching and sweeping concept for energy production in the coming decades, making our power generation the most efficient and most environmentally friendly in the world,” Merkel told reporters in Berlin.

The lives of older plants will be extended by eight years and those of newer ones by 14 years, Environment Minister Norbert Röttgen said.

He said nuclear utilities would have to pay part of their extra profits from the extension to develop renewable energy.

Chancellor Angela Merkel’s predecessor Gerhard Schröder had decided to mothball the reactors by around 2020. But Merkel wanted to postpone the shutdown as part of a new “energy concept” for the country due to go before her cabinet on September 28.

“We have together found a way to take Germany forward,” said Economy Minister Rainer Brüderle.

But the decision was criticised by Greenpeace and other environmental groups as well as Germany’s Green Party.

And Austria’s environment minister Niki Berlakovich termed it a “hard blow for the… development of renewable energy.

“The future of energy supplies lies indisputably in renewable energy,” he said. “In any case, nuclear energy will not answer the problems related to climate or be a solution to reducing CO2 emissions.”

Merkel called the extension a “bridge” until renewable sources of energy such as wind and solar power can produce more of Germany’s power as it seeks to reduce dependence on coal.

A debate has raged in the country and in government over how long to extend the life of the reactors and what price to exact from the energy industry, which stands to benefit from the move.

Support for Merkel’s coalition has tumbled in recent opinion polls and surveys suggest a majority of Germans opposed the idea of postponing the date that the country goes nuclear-free.

The chancellor, a former environment minister herself, had earlier hinted that her preference was for an extension of 10-15 years, saying this is what is “technically reasonable.”

But not everyone in her squabbling coalition agreed.

A government-commissioned report last month was meant to bring clarity but with so many variables, not least predicting future electricity and oil prices and demographics, it ended up highly inconclusive.

It did however outline how high the stakes are.

Without nuclear power, the report said, Germany could forget about its target of reducing CO2 emissions by 80 percent in 2050 from 1990 levels.

Environmental group Greenpeace heaped scorn on the report and accused Merkel of yielding to the powerful nuclear energy lobby, a charge echoed by an increasingly confident opposition.

Another item in the mix is the debate over how to make energy companies such as RWE, Vattenfall and EON pay for the extension of their plants and ensure a greater contribution to Germany’s energy output from renewable sources.

As part of an €80-billion austerity programme for the period 2011 to 2014, Berlin wanted to tap energy firms, a quid pro quo for keeping their plants open for longer.

But the utility companies are putting all their considerable lobbying powers into resisting such a levy and the nuclear tax was not in the austerity package the cabinet approved Wednesday.

Merkel has a tricky challenge on her hands, as she needs to ensure any draft law would not be subject to approval in the Bundesrat upper house, where she lost her majority earlier this year.