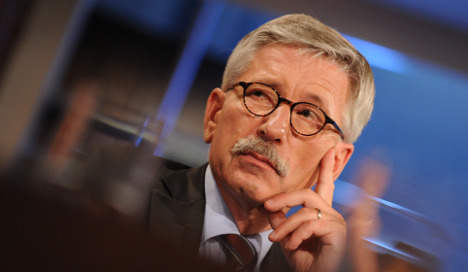 A poll published by the news magazine Focus reported that 63 percent of respondents disagreed and 31 percent agreed with the proposition – a key claim in Sarrazin’s anti-immigration arguments that have sparked furious debate this week.

“They serve to divide. Whole groups in our community feel injured by this,” she said.

Merkel also said that integration was the most important issue of our time.

“We have to discuss it realistically and must not arouse antipathy and ill-will. That hinders integration instead of advancing it.”

While problems still existed, most Turks, who belong to the country’s largest immigrant group, were well-integrated, she said.

Improvements would take efforts from the government, the community and immigrants themselves, she said.

“Living together is a matter of give-and-take,” she said. Immigrants must be prepared “to get involved in life within our community and to accept our legal system without reservation,” she said.

Merkel is one of many politicians who have elevated improved integration of Germany’s Muslim communities since Sarrazin sparked widespread condemnation with inflammatory interviews surrounding the launch of his book, “Abolishing Germany – How we’re putting our country in jeopardy,” on Monday.

The chairman of the interior committee of the Bundestag, Wolfgang Bosbach of Angela Merkel’s conservative Christian Democratic Union (CDU), called for a “serious discussion to designate the progress and the problems of integration, without taboos.”

Though there were a million integration success stories, there were “also too many cases of refusal to integrate,” he told the Neue Osnabrücker Zeitung.

The SPD’s interior spokesman, Dieter Wiefelspütz, said integration was “the mega-issue of the next year” and needed to be pushed forward with greater effort.

“In particular, the federal Interior Ministry is too passive,” he told the same paper. It must finally put integration at the top of its agenda.”

President Christian Wulff, who was on Friday weighing a Bundesbank recommendation to sack Sarrazin, also weighed into the debate. He defended the vast majority of immigrants against Sarrazin’s charge that they were not interested in integrating into mainstream German society, but acknowledged there was pressing work to be done.

But he added: “Failed efforts in integration must be made up for,” he said. And while that was partly the role of the government, “clear demands have to be expressed to migrants,” he said.

Sarrazin has claimed, among other things, that Muslim communities don’t want to integrate with mainstream Germany, that they are making the country “dumber” and that ethnic groups are distinguished by particular genes – for example that “all Jews share a certain gene.”

For the Focus poll, the firm TNS Emnid surveyed 1,001 people on September 1 and 2.