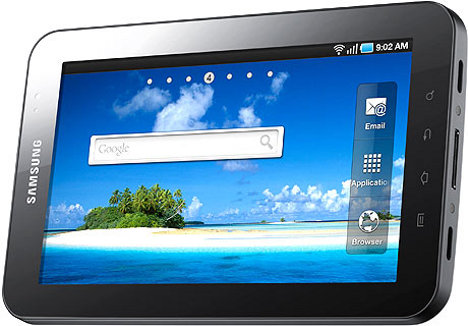 The Galaxy Tab, weighing 0.8 pounds (380 grammes) – almost half the iPad’s 1.5 pounds – launches in Europe in mid-September, and in other markets including South Korea, the US and elsewhere in Asia in the coming months.

But Samsung gave no indication however of whether the Galaxy Tab will undercut the iPad on price, which retails from $499 in the United States – or €499 in Europe – for the basic model.

Apple sold more than three million iPads in the 80 days after going on sale in the United States in April, with demand so strong that some US customers had to wait several weeks to get their hands on one.

Since then, the device, which used Apple’s own MAC iOS operating system, has gone on sale in more than a dozen other countries and is poised to hit the shelves in China, the world’s largest Internet market, later this month.

The success caught California-based Apple’s competitors on the hop, and they have been rushing to respond with their own tablet PCs.

It is rumoured however that Japan’s Toshiba will also unveil its own tablet PC in Berlin later on Thursday. Samsung’s South Korean rival, LG Electronics, has promised to release a tablet PC using Android before December.

Tablets are smaller both in size and in memory than a desktop, notebook or netbook computer, but are bigger than smartphones, offering users video, music, games, Internet and electronic books – all with touchscreen.

“The biggest market (for tablets) is for leisure. The iPad is becoming the main computer, the first to be switched on in the morning and the last one at night,” Jörg Wirtgen from German tech magazine c’t told news agency AFP. “But you can’t do everything, only the pleasurable stuff. For lots of tasks you still need a PC or a notebook.”

He also said they offered much more than e-readers like Amazon’s Kindle.

Gadget website T3 said the Galaxy Tab is “coming for the iPad, and it means business,” saying it was on “everyone’s ‘must see’ list” for this year’s IFA, which opens to the public on Friday.