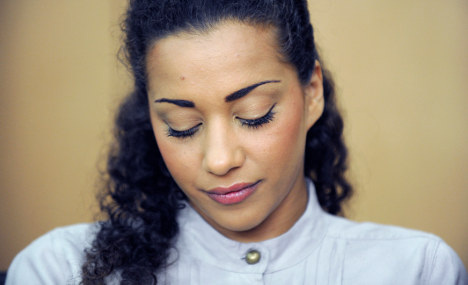 Prosecutor Peter Liesenfeld called for a two-year suspended sentence for

singer, a high-profile case that AIDS groups fear could harm their cause.

Liesenfeld said the singer, a member of the girl group No Angels, should receive lenient treatment as she had confessed in court and “shown an understanding of her guilt.”

Her confession was “an important point that must be taken into consideration,” he said.

Benaissa, wearing a long grey shirt and black trousers, appeared nervous as the prosecutor delivered his summing-up and kept her eyes fixed on the ground.

“I am sorry from the bottom of my heart. I would love to turn back the clock, but I can’t,” she said.

During testimony earlier in the trial, the mother-of-one broke down in tears as she made a dramatic apology for keeping her HIV status a secret from her sexual partners, but denied intending to infect anyone with the virus.

A medical expert, Josef Eberle, testified earlier Wednesday that Benaissa had in all probability infected one of her partners, a plaintiff in the case, as they both had a strain of the virus that is relatively rare in Germany.

When she was charged in February with causing bodily harm and attempting to cause bodily harm, the news was leaked to the press, sparking a media frenzy and a debate about trial by media and presumption of innocence.

According to the charge sheet, the defendant had unprotected sex five times between 2000 and 2004 with three men and did not tell them she was infected.

“We are concerned about the result of the trial because it risks sending the message that you shouldn’t get screened for the HIV virus because if you don’t know, you’re not liable,” said Volker Mertens, spokesman for the German AIDS help association.

“The trial could also give the impression that an HIV carrier has a greater responsibility whereas we believe everyone should assume responsibility when it comes to sexual relations, for example by insisting on condom use,” he added.

The case also sparked intense media interest because the half-Moroccan singer shot to fame in 2000 thanks to a television talent show and went on to score a string of hits in central Europe.

A verdict was expected Thursday.