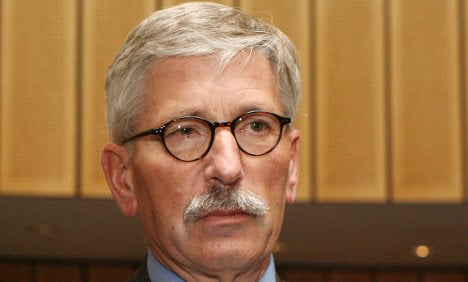 While in the southwestern city of Worms on Tuesday, Gabriel told journalists that Sarrazin’s words against Germany’s immigrants and their ability to integrate have been “daft” and sometimes even “violent.”

He also said he planned to review whether his fellow party member had assigned particular characteristics to certain ethnic groups such as Muslims, Africans and Asians, saying that if he had, this would be “racist.”

“If you ask me why he still wants to be a member of our party – I don’t know,” Gabriel said.

But he did not directly demand that Sarrazin give up his party membership and said only a court battle could force him out of the SPD.

Gabriel also said he would like to engage Sarrazin in an “intellectual argument,” adding that in addition to his many inappropriate comments he has also said things worthy of contemplation.

Gabriel’s comments came after Sarrazin gave an interview at broadcaster Deutschlandradio Kultur to discuss a his new book on integration, to be released at the end of the month and entitled Deutschland schafft sich ab – Wie wir unser Land aufs Spiel setzen, or “Abolishing Germany – How we’re putting our country in jeopardy.”

During the radio interview he alleged that some 40 percent of immigrants of Muslim background live on welfare and are “spared” any kind of integration.

“For all Muslim immigrants in Germany this statistic reality is true: Overall they have cost us much more socially and financially than they have brought us economically,” he added, blaming the country’s policy of “unqualified immigration.”

The comments by the 65-year-old, who was Berlin’s finance minister before joining the central bank’s board, are just the latest in a series of remarks that have led to national outrage and even censure by the Bundesbank.

In September 2009 he made anti-immigrant remarks against Arabs and Turks in an interview with Lettre International magazine.

He claimed that “a great many Arabs and Turks in [Berlin], whose numbers have grown because of the wrong policies, have no productive function other than as fruit and vegetable grocers.”

Though he apologised for those remarks, Sarrazin refused to step down from the Bundesbank’s board despite pressure to do so. He was however symbolically punished when the institution stripped him of some responsibilities after the incident, which caused widespread outrage.

In June of this year he alleged that Germany is becoming “dumber” because of its foreign population during an address of the Hesse business association on the theme of education, demography and societal trends.

Citing what he called ample statistics for proof, Sarrazin went on to say that in particular, immigrants from “Turkey, the Middle East and Africa” are less educated than those from other countries.

Additionally, immigrants have more children than Germans, he said, adding that this caused the “a different growth of population groups with different intelligence” because parents pass their intelligence on to their children.