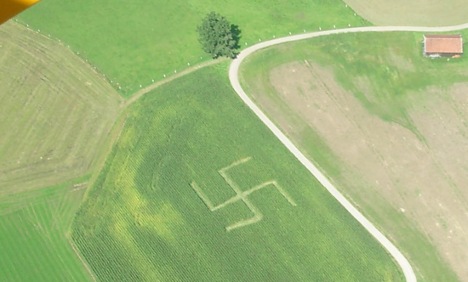 A photographer spotted the Nazi symbol, about half the size of a handball court, on Sunday during a sightseeing flight, and passed the photos on to police, daily Süddeutsche Zeitung reported on Tuesday.

“We’ve never had something of this dimension,” Bavarian police investigator Gerhard Karl told the paper. “At the most someone has peed a swastika into the snow.”

The owner of the land in question, Erna Lechner, called the incident a “pigsty” and a “murderous injury” to farmers in the Upper Bavaria region.

The farmer who rents the land from Lechner did not wish to comment.

“The poor man will now be expected to do something, and in the worst case will have to destroy the crop,” she said.

Aßling Mayor Werner Lampl called the perpetrators “die hards” who were trying to make their mark.

Authorities believe the swastika was stamped into the field sometime on Saturday night, and Lampl did not rule out the possibility that it could have been done by guests at a nearby airfield festival, which drew hundreds from out of town.

But whoever the culprits may be, the accuracy of the formation indicates they weren’t joking around, criminal investigator Karl said, speaking of a very clear “right-wing extremist” motivation.

The use of Nazi symbols is illegal in Germany and carries a sentence of up to three years in jail, he added.

His department plans to take a helicopter out for further investigation in the next several days.

Aßling has already had problems with neo-Nazis in the past, the paper said. Some six years ago police raided a barn shed used as a meeting place, finding a Nazi imperial war flag, or Reichskriegsflagge, and other paraphernalia. Seventeen young people were questioned as possible suspects in the case.

While Mayor Lampl told the paper that efforts to rehabilitate the youths mean there is no longer such a problem in the region, landowner Lechner disagreed.

“Unfortunately the brown scene is managing to spread out,” she told the paper, referring to the colour associated with Nazi brownshirts.

Further evidence of the problem can be seen in frequent threats to a local immigrant aid organisation (Ausländerhilfe) and the district presence of the BJR Bavarian youth organisation’s coordination headquarters for work against right-wing extremism, the paper said.