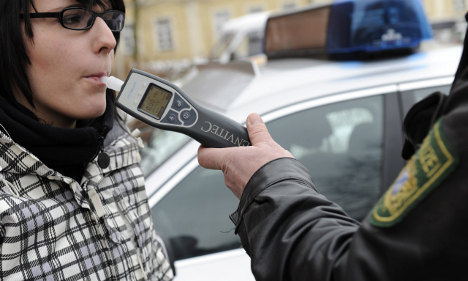 Though the increases were widely criticised at the time, they have been effective, according to a nationwide survey by the Financial Times Deutschland.

The greatest improvement has been logged by authorities in Germany’s most populous state of North Rhine-Westphalia, where the number of drivers caught drunk behind the wheel dropped by 14 percent to 8,951 in 2009, the paper said.

In both Brandenburg and Bavaria cases dropped by 13 percent, while Mecklenburg-Western Pomerania and Rhineland-Palatinate saw reductions of eight and six percent respectively.

The incidence of alcohol-related car accidents also went down by more than 10 percent last year following an increase for 2008 before the new fines were instituted, the Federal Motor Transport Authority (KBA) told the paper.

While fewer drunk drivers may be on the roads, attempts to discourage speeding with higher fines have not made the roads any safer, the paper said.

For the first time in seven years, the number of accidents caused by high speed increased by 2.1 percent in 2008.