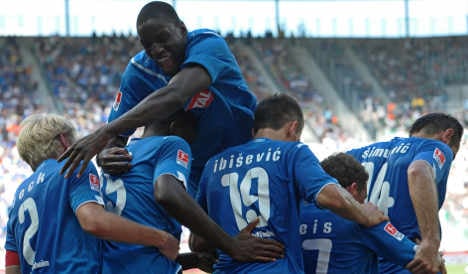 Hoffenheim hammered home three goals within six minutes of each other in the first half, after conceding an early penalty.

“We were extremely bitter about conceding the early penalty and it could have led to gloomy thoughts,” said Hoffenheim coach Ralf Rangnick.

“The team was totally unfazed by the penalty and to lead 4-1 at half-time is just fantastic, in the second-half we went off the boil, but the game was won.”

Fresh from their 3-1 win over Sampdoria on Thursday in the Champions League qualifier, Bremen were humbled as the home side blitzed their hosts in the first 45 minutes.

“We started well with the early penalty, but we lost control of the game and we have to question how that happened.”

Bremen took the lead when captain Torsten Frings slotted home an early penalty after a Hoffenheim hand ball, but it was then all downhill for Werder.

Striker Vedad Ibisevic then made it 3-1 when Frings was robbed of possesion by Brazilian midfielder Luiz Gustavo, sprinted downfield and put in a superb pass for his Bosnian team-mate to convert on 41 minutes.

Bremen’s misery was compounded just two minutes later when Sejad Salihovic curled in a free-kick which left the Werder goalkeeper stranded as it finished 4-1 at the break and stayed that way.

Dutch striker van Nistelrooy scored either side of half-time, including a late winner after Schalke’s Jefferson Farfan had equalised with a dream flick of the foot on 80 minutes.

“It turned out well, that was a super day,” said van Nistelrooy making his league debut for Schalke with former Real Madrid team-mate Raul.

“For me it was not a duel against Raul, he is a mate and friend.

“Today I scored the goals, but next time it could be him.”

Earlier, Bundesliga history was made in Cologne as Lebanon defender Youssef Mohamad earned the fastest ever red card when he was sent off just 92 seconds into the new season in the 3-1 defeat against newly-promoted Kaiserslautern.

After Austrian striker Erwin Hoffer got around the back of the Cologne defence, Mohamad was the last defender and when he brought down Hoffer, referee Doctor Felix Brych showed him a straight red card.

In the other results, Mönchengladbach drew 1-1 at home to Nuremberg as Cameroon striker Mohamadou Idrissou equalised for the hosts.