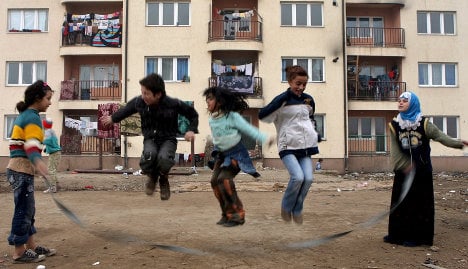 “I feel like I am in prison. I do not go out of the yard,” said 13-year-old Bukurije Berisha in fluent German as she pointed to the high walls surrounding her dilapidated house.

“I still hope I will wake up and see it was a bad dream.”

The girls were born after their parents gained asylum in Germany in 1993, fleeing a brutal crackdown on Kosovo by the late Serbian strongman Slobodan Milosevic.

They speak no Albanian, the dominant language in Kosovo, and only a bit of their parents’ native Roma tongue.

But last December, they landed with their parents and five brothers and sisters in a poor Roma settlement with filthy, narrow streets on the edge of the western Kosovo town of Pec.

The Berishas are among some 14,000 Kosovars – 10,000 of them Roma – to be returned from Germany under a bilateral deal in April, nearly 11 years after the end of the Kosovo war.

And those who will suffer most are children like Bukurije and her sister Lumturije, warn experts including Thomas Hammarberg, the human rights commissioner for the Council of Europe, the pan-European rights body.

On Tuesday, he singled out Kosovo as he urged member states to refrain from action that only worsens the exclusion of Roma, many of whom already live on the fringe as stateless people without documents and thus denied basic human rights.

Rights groups have sounded the alarm about a new round of discrimination against what some call Europe’s most hated minority.

In France, controversy has dogged a government crackdown on illegal gypsy camps and moves to expel foreign gypsies breaking the law, after President Nicolas Sarkozy said some in the community posed security problems. Most Roma – an ethnic group widespread in eastern Europe – in France are thought to come from Romania and Bulgaria, both of which joined the European Union in 2007.

European Justice and Rights Commissioner Viviane Reding already warned in April that “the situation of many Roma seems to have deteriorated over the years,” adding “that is simply not acceptable.”

Last month, the UN Children’s Fund, UNICEF, noted that about half of the Roma to be deported from Germany to Kosovo are children, the majority of them born and raised in Germany.

“Children are the ones most affected by these forced returns,” Hammarberg warned in a foreword to the UNICEF report. “In Kosovo they are confronted with an entirely new reality. They feel lost and alienated.”

The home the Berishas left was burned down in the bloody 1999 war that ended the conflict in the former Serbian province, which declared independence in 2008 despite fierce Serbian opposition. Now the family lives in a cousin’s house with no indoor plumbing or running water.

The two sisters no longer go to school. They blame language trouble but also say they feel like outcasts with their urban European manners and fashionable clothes.

”Children tease and call us names in school,” Lumturije said.

They long to return “home” and vow to do so when older.

“I was born there and I feel German,” a tearful 14-year-old Lumturije Berisha said, remembering her home in Arnsberg, western Germany. “I miss my school. I miss going to walk with friends in my city.”

Analyst and prominent Roma journalist Kujtim Pacaku said it was an “illusion” to expect Roma children to integrate “after such a cultural shock.”

“To do so, they have to forget all their previous experience and knowledge and begin from zero.”

Germany has pressed for the refugees’ return for years. And despite the April deal, even Kosovo’s Minister for Welfare, Nenad Rasic, conceded that his country simply does not have the resources to receive and integrate all returnees.

Kosovo is considered one of Europe’s poorest countries where official figures show nearly half the two million population is unemployed and living under the poverty line.

Critics in both countries have charged that Kosovo is unable to guarantee basic human rights like access to adequate housing, health care or education to its own inhabitants, much less to returning Roma.

Kosovo “first must create conditions for their integration,” said a Roma member of parliament, Danish Ademi, who opposes the return of gypsies.

“Otherwise, people will have to beg or steal … in order to feed their families,” he said.

Families with special needs children have not been excluded from the expulsions from Germany. Staff at the German embassy in the Kosovo capital Pristina was not available for comment.

The nine-member Miftari family was returned after a 16-year stay in Germany where two of their sons, now seven and 11 and both profoundly deaf, were born.

“In Germany the conditions were ideal. They went to a specialized school which picked them up from home each day and returned them,” their father Shemsi Miftari said sadly. “Here they are forced to collect scrap metals and tin cans.”

The Mulolli family has a similar tale. Their two-year-old daughter suffers from what they said is a congenital disorder that makes her “forget” to breathe in her sleep, though they could produce no verifiable medical documents, saying they were given only a short time to pack one bag per family member when they were expelled and had no time to gather medical documents.

Selina’s condition is controlled by special, expensive portable equipment attached to her chest at night to alert her parents if she stops breathing, they said.

“The equipment uses replaceable and expensive diodes we cannot afford and which even do not exist here,” her father Florim said.

“Germany condemned Selina to death, but we will not let her die,” he said bitterly, hugging the lively blonde girl on his lap.

Florim’s son Rrahman, 14, like the Berisha girls, said he felt like a refugee in Kosovo and was in constant touch with his German friends via Facebook.

“When German police came to our flat to take us to the airport they said, ‘We’re taking you home,'” he said.

“I told them my home is here.”