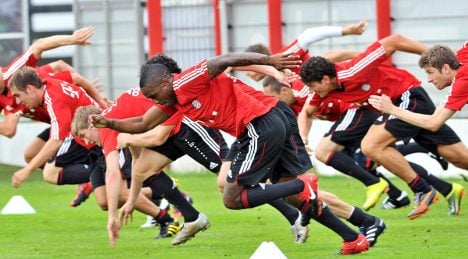 Their rivals will be doing their best to stop Bayern claiming their 23rd title as German champions and there have been some interesting additions to the Bundesliga during the summer breaks.

Bayer Leverkusen have re-signed Germany’s midfield star Michael Ballack after he was released by Chelsea, Wolfsburg have former England coach Steve McClaren at the helm and Schalke have recruited veteran Spain striker Raul.

But Bayern coach Louis van Gaal has considerable riches in his squad and Munich are the overwhelming favourites to retain the league title.

Superstar wingers Arjen Robben – once he is fit again – and Franck Ribery will be looking to produce their deadly double-act at the start of last season which the German media dubbed ‘Robbery’.

Attacking midfielder Toni Kroos returns from a loan spell at Leverkusen, along with Bayern’s rising stars Thomas Müller and defender Holger Badstuber, all of whom impressed as Germany finished third at the World Cup.

Up front, veteran striker Miroslav Klose showed he still has plenty of football to offer after scoring four goals at the World Cup.

Along with Mario Gomez, he will challenge first-choice centre forward Ivica Olic for his starting place as Bayern’s lone striker.

In defence, left back Philipp Lahm took over the German captaincy in South Africa and only enhanced his reputation as a world-class player with impressive performances.

Likewise, defensive midfielder Mark van Bommel played a key role in helping the Netherlands reach the World Cup final and will bolster the Bayern midfield alongside Bastian Schweinsteiger, who had a stellar World Cup.

The only chink in Bayern’s armour is in defence where Munich has struggled for a decent right back to complement Lahm on the left wing.

Likewise, centre-backs Martin Demichelis and Daniel van Buyten have struggled for pace on occasion, but Bayern will again be the team to beat this season.

The strongest challenge is likely to come from Felix Magath-coached Schalke 04.

The Royal Blues pushed Bayern all the way last season and have recruited Raul from Madrid, who will bolster Schalke’s attack.

Magath has forged his side into a strong unit. Having earned their place in the Champions League, they will be looking to steal Bayern’s thunder.

Hamburg faded badly at the end of last season, but under new coach Armin Veh, they have talented forwards like Germany’s Piotr Trochowski and Dutch striker Ruud van Nistelrooy, while defender Heiko Westermann takes over the captaincy.

Outlook: The question this season is, who can stop the march of Bayern Munich to their 23rd German league title? With the likes of youngsters Toni Kroos, Thomas Mueller and Holger Badstuber back from a successful World Cup campaign, Bayern will be hard to beat this season. With the experience of Philipp Lahm, Bastian Schweinsteiger, Miroslav Klose and Mark van Bommel, only a brave fan would bet against Bayern.

Outlook: Schalke have been boosted by Real Madrid striker Raul, former Germany centre-back Christoph Metzelder and Greek defender Kyriakos Papadopoulos. Felix Magath has won the Bundesliga title with Bayern Munich and Wolfsburg and will not want to be denied another German league title by the men from Munich.

In: Arnautovic (€6.5 million transfer from Inter Milan), Kroos (€150,000 from Hansa Rostock), Schindler (return from loan at Duisburg), Thy, Trinks (both from youth academy), Vranjies (back from loan at Genclebirligi), Wiedwald (from Werder Bremen reserves).

Outlook: The loss of Mesut Özil to Real Madrid will affect Bremen’s attacking prowess, but they still have winger Marko Marin, who will be a star of the future for Germany. Under captain Torsten Frings, Bremen will not be push overs, but it remains to be seen whether they will still be in contention come next May.

Outlook: Bayer have never been German champions, but with Ballack back in the midfield they will have the steel which they missed last year when their title challenge folded in the last few weeks.

Outlook: The sale of Sami Khedira to Real Madrid robs Stuttgart of some power in midfield, but coach Christian Gross will forge his side into a competitive unit. Stuttgart went from the verge of relegation to challenge for a European place last season and Gross proved his credentials as a top-level coach.

Outlook: Hamburg dropped off the pace badly at the end of last season which led to the sacking of Bruno Labbadia as coach. His replacement Armin Veh has a point to prove after being sacked by both Stuttgart and Wolfsburg in recent years. Hamburg have too much talent in their squad not to challenge at the top of the table, but whether Veh can get the most out of talents like Ruud van Nistelrooy remains to be seen.