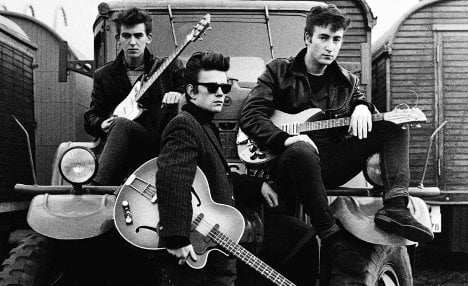 That’s because though The Beatles formed in Liverpool, they learned their licks in the backstreet clubs of the gritty northern German port city.

This August marks the 50th anniversary of the Fab Four’s debut 48-night stint at Indra, a strip club on Große Freiheit, a notorious side street that runs off the Reeperbahn, Hamburg's infamous red-light boulevard.

Five decades after The Beatles’ German sojourn, you can still recreate your own magical mystery tour around the iconic hotspots of the Hanseatic city where the world's greatest pop group came of age.

When the Beatles rolled into the shabby dockland neighbourhood of St Pauli in a small van early in the morning of August 17, 1960, Hamburg’s post-war resurgence was just beginning.

That same night, the then Fab Five of John Lennon, Paul McCartney, George Harrison, Pete Best and Stuart Sutcliffe, a raggle-taggle gang of leather-jacketed, pompadoured Scousers played their first gig at the Indra, a self-styled ‘music and vaudeville’ club. This tiny venue, at Große Freiheit 64, is still going strong today.

Fuelled by a heady mix of youthful enthusiasm, raw talent and Preludin pills, the nascent Beatles hurtled through an eclectic assortment of rock, pop, and R & B covers at high volume and breakneck speed. The boys bunked in a windowless cell behind the screen of a local cinema, the now defunct Bambi Kino, at nearby Paul-Roosen Strasse 33.

After two months of incessant gigging at the Indra, five hours a night for 30 marks each, owner Bruno Koschmider promoted The Beatles to his flagship club, the Kaiserkeller, a short stroll down Große Freiheit towards the neon lights of the Reeperbahn.

The band shared the bill with rival Liverpool group, Rory Storm & the Hurricanes, whose drummer happened to be Ringo Starr. Today the Kaiserkeller is an alternative rock club housed within the Große Freiheit 36 music venue. Across the street is Gretel und Alfons (#29), a cosy old-school bar where The Beatles found regular sanctuary from the myriad sex shops and strip clubs, and where McCartney ran up a huge bar tab only to return in 1989 to pay it off, with interest.

A broken bottle’s throw away is the site of the Star Club (Große Freiheit 39), where The Beatles shared the bill with fellow Liverpudlians Gerry & the Pacemakers and big-name US acts like Jerry Lee Lewis and Little Richard. It went up in smoke in 1983 and only a gravestone-shaped plaque remains etched with the names of other Star Club legends such as Gene Vincent and Jimi Hendrix.

Prior to their stint at the famous Star Club the fledgling Beatles had graduated, in the words of McCartney to “the big club where we aspired to go,” The Top Ten, situated in a basement in the heart of the Reeperbahn (#136). Formerly the Hippodrome, a subterranean circus, today a disco, it was here the band really found their feet with an echo-laden, reverb-friendly sound system, perfect for The Beatles’ raucous performances, and slightly less dingy sleeping arrangements, in an attic above the club itself.

Upon leaving their former lodgings at the Bambi Kino, McCartney and drummer Pete Best played a prank on owner Koschmider. They hung a lit condom outside their room, were duly accused of arson, arrested and banged up overnight at the Davidwache police station at Spielbudenplatz 31. Deportation swiftly followed. The 17-year-old George Harrison had already been sent packing back to Liverpool for being underage.

CCTV cameras sit aloft the modern extension of Davidwache Polizei today, trained on Herberstraße, the infamously seedy, block-long bordello. Its imposing walled entrance bar views of the brothels, declaring them off limits to men under 18 and to women of all ages. This didn’t stop a 19-year-old John Lennon and his 17-year-old partner in crime Gerry Marsden, of Gerry & the Pacemakers, paying the brothel a visit, before legging it at the sight of prostitute who, according to Marsden, “looked like a bus with a bra on.”

Round the corner is Paul Hundertmark’s Western Store where the Beatles assembled their trademark Hamburg look: cowboy boots, drainpipe jeans and Gene Vincent-style leather jackets. You can still go and get yourself kitted out in Beatles clobber at Paul’s store at Hundertmark 9. Then head for Wohlwillstrasse 22 and re-create the publicity shot taken by local snapper Jürgen Vollmer, who became a fast friend of the band, in 1960. John Lennon posed in the doorway of Jäger-Passage 1 as three blurry figures walked past him in the foreground. Those figures are McCartney, Harrison and Sutcliffe. The photograph was unearthed years later and became the iconic front cover of Lennon’s 1975 Rock ‘n’ Roll album.

When The Beatles returned to Hamburg in April1962 for their residency at the Star Club they were broken the news of bass player Stu Sutcliffe’s tragic premature death from an aneurysm. By the time of their second stint in November, Ringo Starr had become the group’s drummer, and the, now officially, Fab Four were big enough to warrant actual hotel rooms; first at the Germania (Detlev-Bremer-Strasse 8) and then at the Pacific (Neuer Pferdemarkt 30). Both hotels are still running and are a short stroll away from Heiligengeistfeld (Holy Ghost Field) where Astrid Kircherr, Sutcliffe’s German girlfriend, took the famous fairground photos at the Hamburger Dom that launched the new image she’d inspired them to adopt: collarless jackets and mop top haircuts.

At the crossroads where Große Freiheit meets the Reeperbahn is the Beatles-Platz Memorial. Unveiled in September 2008 it consists of wholly underwhelming silhouette statues, rendered in steel, of the five original group members, including a hybrid of Ringo and Pete Best. Diagonal to this is the Beatlemania exhibition, a treasure trove of memorabilia from the band’s 1960-62 Hamburg heyday.

By all means go for a quick scoot round the museum, but then swiftly hightail it off the Reeperbahn. Perhaps there was a whiff of glamour and excitement for the baby-faced Beatles fifty years ago, but now it’s just a squalid potpourri of tragic lap-dancing clubs.

After a night on the tiles of St Pauli and the Schanzenviertel take a final stroll in the footsteps of The Beatles with a twilight visit to the Fischmarkt (Große Elbstraße), a Hamburg institution since 1703 and a singular post-partying ritual which still defines the city’s raffish spirit. The Beatles would habitually head straight there after they finished their Saturday night gig.

John Lennon once bought a pig here, christened it Bruno after his boss at the Kaiserkeller, and chased it round the market causing such a commotion that someone called the cops. This time they weren’t arrested, or deported, but The Beatles’ love affair with Hamburg was in its final year anyway. They got back to where they once belonged, Liverpool, and recorded their first single, “Love Me Do.” The rest is history.

Sadly Bruno the pig didn’t live to hear or see any of it – he met a local butcher, made it onto the menu at the Fischmarkt and became the Beatles’ Sunday lunch.

Exactly fifty years after The Beatles took Hamburg, Bambi Kino, a tribute band named after the Fab Four’s infamous first accommodation in the city, will clamber onto the same stage at the Indra and try to channel some of that old magic.

Comprised of members of US indie bands Nada Surf, Cat Power and Guided by Voices, they will perform the same songs that made up the Beatles set half a century ago.