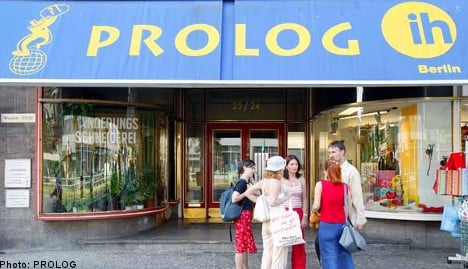 The institution was founded more than 20 years ago and is a member of the International House World Organisation network of language schools, with over 140 schools in more than 40 countries.

PROLOG is located in Berlin’s Schöneberg district. The school teaches 16 languages, with German as a Foreign Language its largest department, teaching students from 60 different countries.

It also offers training and certification in teaching German as a second and Foreign Language. As its website puts it, the school’s aim is “communication instead of frustration.” In addition, the flexibility of the school’s schedule is one less worry for prospective students.

“We have a rollover system. Courses never officially start or stop,” said project manager and media specialist Rik Mayda. “The average duration of stay is three months and students are charged by the month.”

The medium-sized school occupies the top two floors of old building from the 1950s under monument protection. Courses are offered from 8 to 8 Monday to Friday. Classes are separated into 24 rooms, with maximum class sizes at 10 for German and six for other foreign languages.

In addition to teaching languages at the school, PROLOG also sends English-language teachers to companies for in-house training. For its German-language students, it arranges cultural activities and accommodation in the form of homestays, as well as offering visa assistance.

“We select the host families,” said Mayda. “We have hundreds of different families we’ve worked with over the years and we check up on them afterwards.”

Not surprisingly, the non-German language courses are for locals who want to improve their language skills, especially in English, for work, studies abroad or vacations. About half of the school’s classes are for German, while 25 percent of all students are studying English.

The school is especially attractive for university students who want to keep up their language skills during the summer break and live in Berlin.

“Summer is definitely our main season because you don’t want to come to Germany in the wintertime,” joked Mayda. “More people come naturally then. It’s a no-brainer to come in the summer.”

Students can study anywhere from four to 40 hours a week and as Mayda pointed out, “Most students beg for more homework. They are motivated and have concrete goals. It’s not a problem for them to do homework.”

About half of the students, who are generally 18 to 35, find the school through language school agencies and the other half through the Internet or word of mouth.

The school’s 80 teachers, of which half teach German and the other half foreign languages, educate thousands of students in German per year, 2,000 in English and 1,000 in other languages. All are native speakers and have teaching qualifications.

For the students of German, they can take one of the many German tests that certify a certain level in the language at the school.

The school also offers a relatively large teacher training programme, especially for German teachers. The German as a second language programme equips teachers to instruct classes for migrants and refugees.

The school provides invaluable help to immigrants to Germany – those who wish to naturalise must have at least an intermediate level of German to obtain citizenship.

In addition to German-language instruction, it is the only private language school in Germany to certify English, German, French, Spanish, Russian and Turkish teachers through EUROLTA.

As PROLOG states on its website, “The American writer Frank Harris wrote, ‘Every new language is like an open window.’ If that is true, Berlin, as a modern melting pot, has many open windows.”