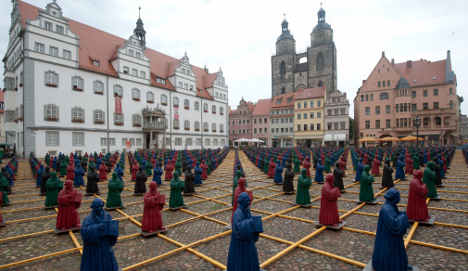 Artist Ottmar Hörl’s project replaces the bronze statue of the reformer which usually dominates the square, along with one of Philipp Melanchthon, another important figure of the Reformation.

These were removed from their pedestals in April to be cleaned ahead of the 500th anniversary in 2017 of Luther pinning his 95 theses on a Wittenberg church door, which is seen as the catalyst for the European Reformation.

Now the square is covered with the Luther figures, which are based on the bronze statue, but are less than life size at 98 centimetres tall.

Hörl has said this is to represent Luther’s own understanding of himself as on eye-level with common people. He said big memorials do not fit such a thinker.

“Luther is a figure who would have more likely made himself small than large,” he said.

“The memorials in Wittenberg are wrong, because Luther would have refused to have allowed himself to be put on a pedestal.”

Friedrich Schorlemmer, a theologian in Wittenberg has criticised Hörl’s project as tasteless, describing it as theological and aesthetic abuse.

The plastic statues, in black, dark green, purple and bright blue, will be available for sale after they are removed from the square on September 12, for €250 each.

Hörl courted controversy with previous installations such as a collection of more than 1,000 garden gnomes giving the Hitler salute, which he took on an international tour, including a stop in Straubing, Bavaria. This was to signify that everyone has fascist thoughts, he said at the time.