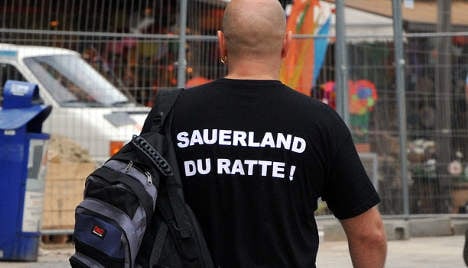 He has also admitted lying about the number of people expected to show up – helping organisers create the illusion that millions of people would come in order to create a big media buzz about the event.

The magazine Focus reported at the weekend that the city’s building inspection officers threatened organiser Rainer Schaller and his company Lopavent with cancellation ten days before the parade.

Test reports on mobile fencing elements were wrong, the magazine reported, with the inspectors writing in their letter that they could cause people to fall over. The absence of an expert report on the safety of the event ground as a whole was also a serious concern.

This letter was copied to Sauerland’s office, the magazine reported, although after the disaster he said he had known nothing about these concerns.

Responding to the magazine’s report he said he had not hidden anything, and that the letter had been included in the documents submitted to the investigating committee.

Its preliminary report says that on July 14 – ten days before the parade – officials were still waiting for crowd movement analysis, a fire protection concept and further files.

Now, three weeks after the 21 people were killed and at least 500 injured in the crush, Sauerland admitted to Der Spiegel magazine that he had colluded with Schaller and Lopavent to inflate the numbers of people expected.

They had spoken of ‘millions’ who would come, in order to create a buzz about the event, which had not been held last year due to safety concerns in Bochum where it had been scheduled to take place.

These publicity estimates figures were much bigger than the numbers used for the planning he said, and were not taken seriously by those involved.

At least a million people are thought to have actually gone to the event, while the disused rail goods yard where it was held was only supposed to accommodate 250,000.

Sauerland told Der Spiegel he had received death threats since the catastrophe, and had moved his family out of Duisburg for their safety. He said one man had called and said he had been paid €5,000 to kill him. Another had threatened to blow up a kindergarten if Sauerland did not resign.

“I have considered practically everything,” he said when asked about what his plans were. “You don’t know which thoughts develop in a person. It’s crazy.”

Yet he has not yet resigned, and this weekend said he would wait for the conclusion of investigations to make a decision.

“Something went wrong with terrible consequences,” he said. “We are working to examine our administrative work now. And the others, the police and organisers must do the same.”

He told television show Kreuzverhör on the WDR station, no conclusion could yet be drawn as to who was responsible.

“Every morning when I wake up, I wish that all we experienced was just a bad dream, but it is reality,” he said in the programme due to be broadcast on Sunday evening.

“It must be established who caused this tragic event. We are not that far yet.”

Although he said he would not be resigning now, he has not ruled out personal consequences.

“Of course I ask myself the question whether one can continue to serve in office after such a tragic event. But I will only give an answer when I have the answers to all these questions which weigh upon us so heavily.”

He insisted he and his administration had pushed the organisers to improve their security planning.