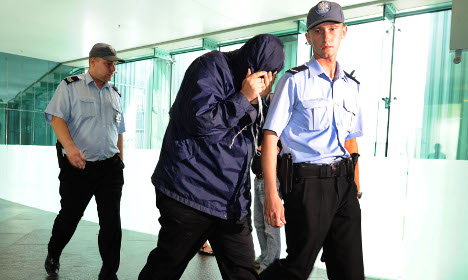 The suspect with police in Warsaw. Photo: DPA

Polish authorities, who had arrested the suspected agent known as Uri Brodsky in June at Warsaw airport on suspicion of obtaining a German passport under false pretences, extradited him to Germany Thursday.

He appeared Friday before a magistrate in the western city of Cologne, who released on him on bail, Rainer Wolf, spokesman for the city prosecutor’s office, told AFP.

But Brodsky may now return to Israel as his maximum penalty would be a fine covered by the bail payment.

“The arrest warrant was suspended after an agreement between the district court and the prosecutor’s office,” Wolf said, adding that bail had been set at “an appropriate amount” without providing details.

Brodsky is accused of illegally obtaining a German passport under the name Michael Bodenheimer which was later found to have been used by a member of the hit-squad that killed Mahmud al-Mabhuh of Hamas in a Dubai hotel room.

The squad, which Dubai police believe was from Israeli spy agency Mossad, was found to have used 26 doctored foreign passports, sparking diplomatic fallout not only with Germany but also Australia, Britain, France and Ireland.

Israel has denied any Mossad involvement in the assassination of al-Mabhuh, the founder of the military wing of Palestinian Islamist movement Hamas.

In the wake of Brodsky’s arrest, Israel called on Poland to send him straight home rather than handing him over to Germany.

Polish Prime Minister Donald Tusk had described the case as “delicate”, pointing to the tragic history between Poland, Germany and Israel.

Nazi-era Germany occupied Poland during World War II. Half of the six million Jews killed by the Nazis in the Holocaust were from Poland.

Warsaw now has close ties with both Germany and Israel, but Tusk said the law left Polish justice authorities little room for manoeuvre.

The case also proved awkward for Germany, which Israel often calls its closest ally after the United States but which has stepped up criticism in recent months of Israeli policy in the Hamas-run Gaza Strip.

Germany had originally wanted Brodsky, who is an Israeli citizen, on charges of espionage. But a Polish court ruled this month that he would only be extradited on charges of obtaining a passport under false pretences.

The German federal prosecutor’s office said the Polish conditions would keep it from charging the man with espionage.

But the spokesman for the Cologne prosecutor’s office said that assuming Brodsky returns to Israel, he could face spying charges if he came back to Germany or if he were arrested in another European Union country.