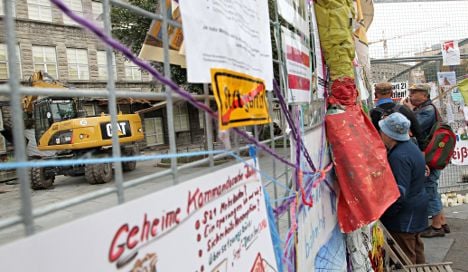 Workers began by tearing down an awning on the building’s northern wing, which will be completely demolished as part of ambitious and expensive plans to revamp the southwestern city’s main railway terminal.

Known as Stuttgart 21, the €4.1-billion project has been widely criticised because it will tear up the city centre for more than a decade and demolish parts of the landmark train station built by architect Paul Bonatz in 1928. But its supporters argue it will make the city an important rail link between Eastern and Western Europe.

On Friday, around 30 police officers secured the construction site after removing four protestors hoping to stage a sit-in to block the demolition. Another 20 demonstrators gathered near the station’s northern wing to loudly chastise the construction workers, according to the police.

An estimated 10,000 people are expected to take part in a demonstration later on Friday, with the aim of making a symbolic human chain around the train station.

But Tanja Gönner, the transportation minister of the state of Baden-Württemberg, warned against abandoning the mammoth rail project.

“We believe that this infrastructure project is crucial to the future of the entire state – and that’s why we won’t back down now,” she said.

Stuttgart 21 will transform the old terminal into a spacey underground station where trains do not have to back out to continue their journey. Transforming 100 hectares of central Stuttgart and digging 57 kilometres of tunnels, it will be one of Europe’s biggest construction sites.

But there have been weeks of protests against the project’s ballooning cost and the destruction of part of the old terminal building.

A spokeswoman for Deutsche Bahn said only the awning would be demolished on Friday, but Germany’s national rail operator hopes to tear down the entire northern wing over the next three months.